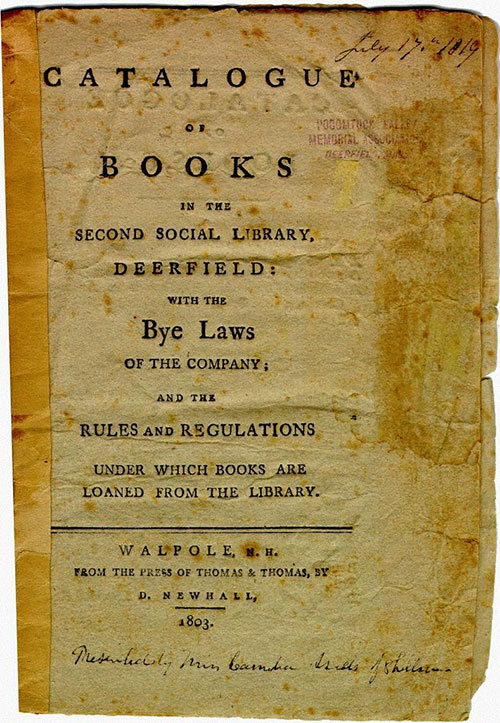 In the 1820's, citizens seeking access to large numbers of books depended largely on “social libraries,” in which dues-paying members collectively purchased and shared books among themselves. During the 1830’s and 40’s, there was a widespread movement to found and expand college libraries, focusing on reference materials for those affiliated with the institutions. Their organization generated new ideas about how libraries in general could and should function.

In September of 1853, eighty librarians, accounting for some 800,000 books between them, convened in New York to discuss library sciences, cataloging techniques and the publicization of libraries. The Norton Literary Gazette enthusiastically shared how “Acquaintances have been formed among numerous members of the librarian’s profession, who had never seen or corresponded with one another before; an arrangement has been made for the regular interchange of catalogues and reports.” Over the course of the meeting, numerous attendees had made suggestions for “the establishment of popular libraries all over the country; and measures have been taken to form the librarians’ association or bibliographical society of a permanent character, the object of which shall be to promote, in every way, the establishment and efficient conduct of collections of books.”

Interest in the establishment of free public libraries lagged, however, although a small number began appearing in smaller Massachusetts communities in the 1850's. The Chicopee, Massachusetts, town library opened in 1853, after receiving its first books from a local private literary society, the "Cabot Institute." The library was open 11 hours a day, six days a week. During the 1870's, the managers of the Free Public Library of Worcester and the Chicago Public Library joined the Boston Public Library in holding public reading days on Sundays. The superintendent of the Boston Public Library noted in 1873, that “The frequenters were uniformly decorous; the most favorable feature of the result being that a large proportion of the Sunday visitors were not such as are seen in the rooms on week days.”

Just as the interest in establishing public libraries was increasing, an Amherst College librarian invented a system that virtually all the new libraries would adopt as their collections grew. In 1873, Melville Dewey had just transitioned from Amherst College student to full-time employee in the college’s library. The collection had grown dramatically in recent years, partly due to an expanding reservoir of printed books coming off American and European presses and partly due to an ambitious acquisitions policy. One bookcase had been sufficient for the original holdings but the library held 6,000 volumes in 1850, and it had doubled in size by 1855. The college needed a better way to catalog their collection than the traditional single “catalogue book” that named each book and its location. In 1864, the Amherst library began using cards that could be easily added or removed, much as the Boston Public Library had recently begun doing.

Dewey encountered another problem beginning to arise on the shelves of this rapidly expanding library. As new books arrived, it became increasingly difficult to mark the position of each book on a given shelf as had been the custom in the past. New additions would shift books over or down. A new system was needed, even a new library science. And so, deep in the shelves of Amherst College, the Dewey Decimal System (for a long time, simply the “Amherst System”) was born. Dewey created a notation system using three-digit numbers for main classification and used decimals to include further details about a book’s content. The system was quickly adopted by fledgling public libraries throughout the United States and beyond.

Three years after he created his new decimal system, Dewey and others called once again for the widespread establishment of free public libraries. This time they founded the American Library Association, chartered in Massachusetts. The industrialist Andrew Carnegie began founding libraries in towns during the 1880's. Near the end of his life, with a net worth estimated at $100 million, Marshall Field gave $8 million to build the Field Museum of Natural History in Chicago, as well as an elegant public library in his hometown of Conway, Massachusetts. Other wealthy philanthropists joined municipalities in founding libraries in towns across Massachusetts and throughout the United States, many of which remain in use today.