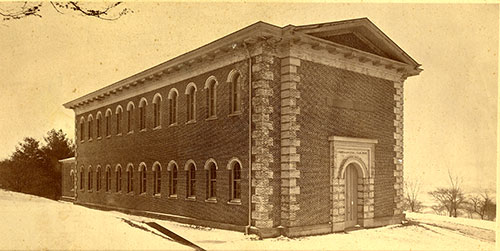 The story of Amherst College’s natural history collections and museums began in 1825, with the hiring of Edward Hitchcock as the school's first professor of chemistry and natural history and eventually, professor of natural theology and geology. Twenty years later, moved by the confidence of his fellow Amherst College faculty who vowed to continue teaching if he would step in as the institution’s third president, Hitchcock reluctantly agreed to take on the responsibility of shepherding the fledgling Amherst College through the gravest financial crisis in its history. Once installed as president, he never looked back, believing it was God’s plan for him to bring the college back to fiscal health and forward its mission of educating young scholars, including “indigent young men of piety and talents.”

While steering the college back to financial stability, Hitchcock never ceased building up its scientific collections. He amassed over the course of his career an impressive collection that would form the basis of Amherst College’s natural history holdings. He commissioned the Octagon in 1847, to house the college’s natural history collection and an astronomical observatory. He also encouraged far-flung alumni to send back to Amherst mineralogical and historical specimens from all over the world, including Assyrian reliefs a Christian missionary acquired at Mosul. One earnest missionary, having no other packing materials, sent him rock samples from Mount Ararat stuffed into a pair of "pantaloons."

When Hitchcock retired from the presidency in 1854, the college honored him by devoting funds donated by Boston merchant Samuel Appleton to build a cabinet, or museum, to display Hitchcock’s extensive fossil specimens in company with other donated collections of Native American artifacts, as well as vertebrate and invertebrate paleontological, zoological, and mineralogical collections.

Amherst’s natural history collections were moved into the Pratt Gymnasium, which was renamed the Pratt Museum of Natural History, in 1951. The Pratt housed the collections until 2004, when the college had them cleaned and had new armatures made for the skeletons before moving them into the Beneski Museum of Natural History, which opened in 2006. Today, Edward Hitchcock’s ichnological collection of 1,700 slabs of dinosaur footprints, insect trails, burrows, ripple marks, and mud cracks attracts researchers from all over the world as well as museum-going students and the general public.