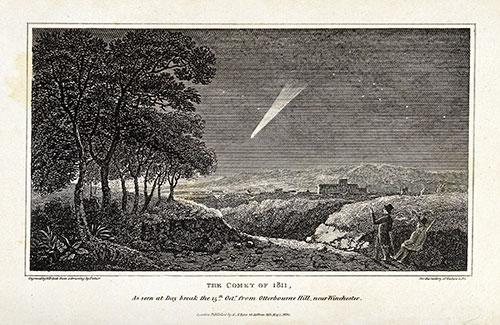 The Comet of 1811. Comets appeared widely in art in the 18th and 19th centuries, when they were objects of considerable curiosity. Image courtesy of Wellcome Library, London.

Today, astronomers can predict when a comet will appear, but to the earliest stargazers, they came without warning, streaking across the night sky, their distinctive long “tails” seemingly omens of fortune or doom. Even in more recent times, comets have aroused superstition. Napoleon Bonaparte, for example, thought the brilliant comet in the sky in 1811 portended his war against Russia.

The understanding of comets took a step forward when the Danish astronomer Tycho Brahe observed the Great Comet of 1577, using instruments of his own design, a few decades before the invention of the telescope. When he compared measurements of the comet’s path taken from widely separated observation points across Europe, he realized that the measurements were nearly all the same. Many people thought that comets flew between the Earth and the moon, but now that theory was disproved. If the comet had been closer than the moon, the observations from each vantage point would have been very different from one another, a phenomenon called parallax.

Comets came to be seen in a new context as astronomers developed their understanding of stars, planets, and galaxies. Nicolas Copernicus proved that the Earth is not the center of the universe in 1543, and during the early 17th century, the German astronomer Johannes Kepler began to understand how planets move. Later in that century, Isaac Newton successfully predicted the path of the Great Comet of 1680. His friend Edmund Halley noticed that a comet he observed in 1682 was already in records from 1607 and 1531, confirming that some comets move in cycles. Coincidentally, Halley’s Comet returned in 1835, the year Edward Hitchcock began studying fossil “bird tracks,” or dinosaur footprints.

Meteorites remained a mystery until much more recently. We are so accustomed today to understanding that they come from outer space and enter the Earth’s atmosphere, that we forget how strange it would be to see rocks falling from the sky without knowing where they came from. Some scientists thought they might be ejected from volcanoes, but since no one ever saw a meteor leave a volcano, this was an unsatisfactory answer.

The German Ernst Chladni (1756-1827) thought meteors were “opaque wandering masses” of extraterrestrial origin. Chladni was ridiculed for his theory, but he had influence nonetheless. In 1795, pieces from a meteor fall on Yorkshire, England, were chemically analyzed, and it was determined that the fragments could not have come from Earth. In 1803, the French astronomer Jean Baptiste Biot came to the same conclusion when studying a similar event in L’Aigle, in northern France. This was a particularly spectacular fall, with 2,000-3,000 fragments and numerous credible witnesses. The meteor had come from high in the sky. It could not have originated from a volcano on Earth.

In June 1818, letters in the Philosophical Magazine pondered whether rocks falling from the sky could be projectiles from volcanoes on the moon. How strong a force was needed for a projectile to fall so far, and even were this accomplished, since it could be flung off in any direction, why would it fall to Earth? Could the observed angles of meteors in flight be reconciled with the position of the moon? “And with such density,” the letter writer asked, for meteorites are characterized by their surprising weight, “to what astonishing depth must it not bury itself? And must not the force and depth of such an explosion be sufficient to rend the moon itself into fragments? Nothing comparable happens in our volcanoes on earth.”

A letter writer in Ireland had chemically analyzed stones that fell on Tipperary: “Silex in large quantities; Magnesia; Iron in its metallic state; Nickel in small proportions; Sulphur and oxide of iron. As no other mineral substance hitherto discovered on our globe consists of the above ingredients, we must consider them as foreigners.” He concluded that the fragments could not be projectiles from volcanoes, whether on the moon or the Earth. And why were they so hot? Sometimes meteorites could not be touched for a long time after landing. The writer, William Higgins, thought that these "electric stones" were heated through friction, then lost electricity as they descended, giving off thunder and lightning.

Scientist and editor of The American Journal of Science Benjamin Silliman heard about the Yorkshire meteorite fall ten years after the event, when he was studying in the hotbed of academic geology, Edinburgh, in 1805. It is likely he heard of Biot’s study at that time, too. Silliman was well prepared, therefore, when he was back in Connecticut on December 14, 1807, and sightings of a large meteor were reported from Vermont, Massachusetts, and Connecticut, where it finally landed in the town of Weston, Connecticut. Two or three days later, when Silliman learned of the event, he and Professor James Kingsley sped off to investigate. They interviewed many witnesses, who all described a large fireball and an explosion heard over 40 miles away. Local farmers saved meterorites as souvenirs, but Silliman and Kingsley were able to salvage some for scientific study. The largest one that had fallen, estimated at 200 pounds, was smashed open, supposedly by people hoping to find gold.

Like Biot and Higgins, Silliman conducted chemical analyses and concluded that the meteor must have originated from beyond the moon. This was the first such analysis in the United States and one of the first in the world.