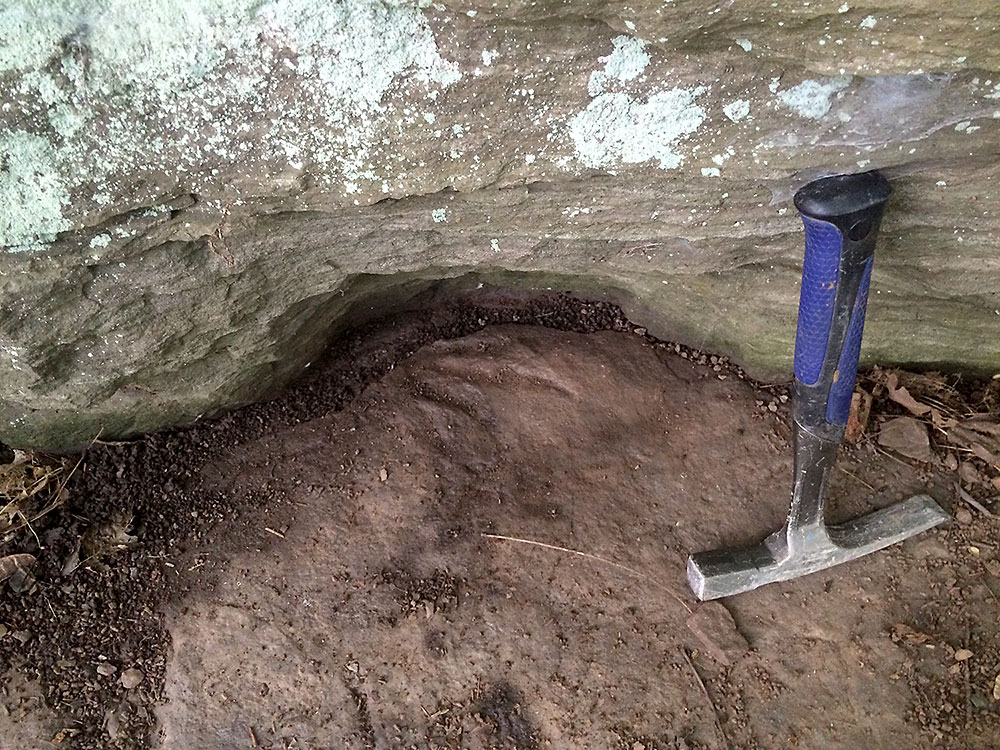 It is harder to see fossils when they are not neatly presented in a museum or similar setting. If you look closely, you should be able to see one here with little trouble. The hammer is to show scale. Image courtesy of Patrick Getty.

Not all kinds of rock can contain dinosaur footprints and other trace (or impression) fossils. Clearly, the initial material in which tracks are made has to be soft enough to receive an impression, yet firm enough to hold the shape. Only a few kinds of earthen materials can do this: silt, fine sand, and limy mud are common examples.

Dinosaur footprints are found only in sedimentary rocks, which are formed through the deposition and solidification of sediments, or particles, transported by water, ice, and wind. The tracks in the Connecticut River Valley are in sandstone, initially fine sand-sized sediment. Those at the Paluxy site near Glen Rose, Texas, are in limestone, initially limy mud from an invading sea. The principle of how they formed, however, is the same.

The Connecticut River Valley contains the only extensive sandstone formation in New England, which is otherwise mostly granite, basalt, and metamorphic rocks. During the Late Triassic and Early Jurassic periods, the area had a shallow inland freshwater sea, called a playa, that attracted animals to its shores. The dinosaurs would leave footprints in the mud and under certain circumstances, when there was enough time for them to harden, they would be preserved before being covered by sand and water. Often, footprints are found near water ripple marks preserved in the sandstone, indicating that the animals may have been walking along the water's edge or even wading into it. Formations with mud cracks show that a dry period occurred, and raindrop impressions in other places tell of a rainstorm.