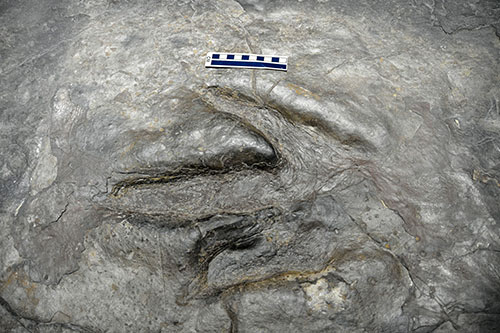 A eubrontes footprint with a 6-inch ruler to indicate size. The specimen is from the Beneski Museum of Natural History. Image courtesy of Nash Dinosaur Track Quarry and Rock Shop, Granby, MA.

The number of paleontologists studying dinosaur footprints has increased dramatically since Edward Hitchcock's day, and especially over the last 20 years or so.

Footprints provide information about the environments in which dinosaurs lived, their gaits, whether or not they traveled in herds, and other information that skeletons do not necessarily divulge. Sometimes, skin impressions survive near footprints or in the pattern of skin on the foot itself. The kind of rock in which a footprint is found may be a clue to the environment in which that type of dinosaur lived.

Paleontologists use a variety of methods to study fossil footprints. Some are quantitative: measuring the size and breadth of a single print and the step length from the toe of one track to the heel of the next, and using these measurements to calculate the possible size of a dinosaur, for example. Some paleontologists compare fossil tracks to living animals, which can give an idea of possible anatomy and how the creatures moved and behaved. Others analyze the lithified (compressed into stone) mud in which the footprints are embedded.

Modern technologies allow paleontologists to move beyond the techniques that were available to Hitchcock, such as photogrammetry (taking measurements from photographs) and bi-planar x-rays that are used to create 3-D images. Hitchcock and his colleagues used a general vocabulary to describe the substrate a footprint was in (such as soft mud or hardened sand), but paleontologists now are developing a scale, similar to a geological hardness scale, to more closely describe the living environment in which a track was made.

Mapping trackways is another important tool, particularly useful for specimens with several criss-crossing trackways that can appear confusing until the links are made between the footsteps of one dinosaur. Edward Hitchcock and James Deane used this technique early in their studies of footprints. Deane sent such a diagram to Gideon Mantell in England when he was trying to convince him that the impressions had a meaningful pattern to them, that is, that they were footsteps going in specific directions.

Some footprints are in museum or university collections, where paleontologists study the fossils themselves, or in some cases, make molds to study. Even though the footprints are in rocks, they are still delicate, and the less they are handled, the better. Some trackways are left outdoors where they are found so that others can enjoy them. Such is the case at Dinosaur State Park in Connecticut and the Dinosaur Footprints site in Holyoke, Massachusetts.

Some methods of studying footprints are shown on this website and can be found by clicking on the links below.