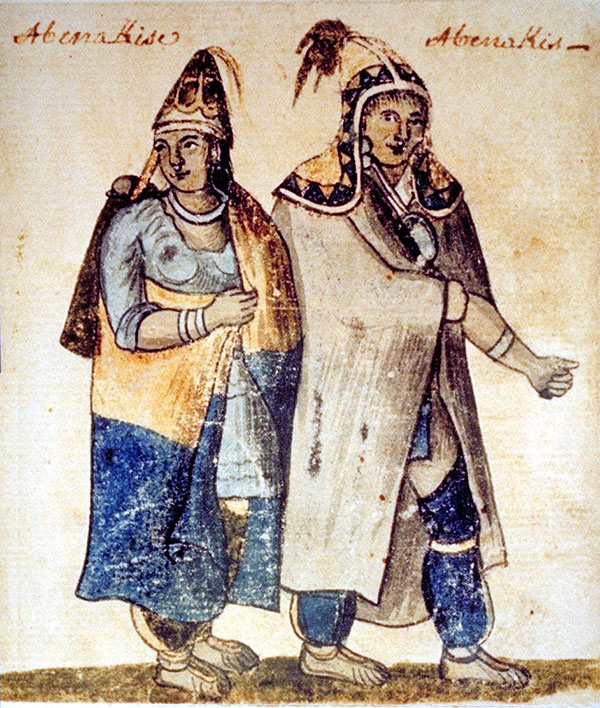 In the 18th-century watercolor, an Abenaki man and woman wear both traditional and European materials. Image courtesy of City of Montreal, Records Management and Archives.

Native peoples were the first discoverers of the remains and tracks of dinosaurs on this continent and, in some instances, it was they who brought the bones, teeth, and tracks to the attention of people of European descent living here. As early as the late 17th century, they tried to describe to whites the giant monsters that once inhabited the earth, but they were not often believed. Edward Taylor, a minister and poet from Westfield, Massachusetts, recalled stories told to him by local Native people of these monsters but he didn’t believe the stories until 1705, when he was privileged to see the huge teeth, most likely of a mastodon, that had been found along with skeletal remains protruding from the banks of the Hudson River in Claverack, New York. Various Iroquoian and Algonquian groups believed these bones and teeth were from giant naked or hairless bears with huge heads. The Abenaki referred to them as “Gici Awas” and they were called “Nyah-Gwaheh”, among other names, by the Iroquoian peoples.

In 1739, a group of French soldiers and Abenaki hunters camped at “Big Bone Lick” along the Ohio River in Kentucky. When the Abenaki men returned from a hunt with not only fresh meat but also huge fossilized bones, tusks, and teeth, the French were fascinated and eventually sent some of these specimens to France. The Lenape, Shawnee, and other Native groups had known about this site for many years as an area rich with game, and as a site for collecting much-needed salt. Over the course of hundreds of years, sulfur springs located there had deposited salt into the earth. Mammoths and mastodons, along with other prehistoric creatures, were drawn to the area because of it and many died there, becoming stuck in the marshy bog land surrounding the springs. Some Native peoples believed that the huge bones found there were from the mythological white buffalo that had died from drinking the salty water. Some Algonquian peoples held that the bones were from monsters killed by the transformer trickster known as "Nanabosho" (Anishanabe), "Wetucks" (Narragansett), or "Moshup" (Wampanoag, Mehegan, Pequot). Long before Europeans arrived, a variety of Native tribes were trading fossilized bone and ivory. Robert Smith, who traded with Native peoples, is recorded as the first (in 1744) to remove fossilized bones from Big Bone Lick.

Dinosaur tracks were observed by various groups of Native peoples around the country. The Seneca, Cayuga and Onondaga people of the Iroquois Nation have a story about the "Great Mosquito."  In the story, the sky spirit killed the Great Mosquito at a salt lake in Onondaga, New York, and it is said that Onondaga and Cayuga people came to see the body and its tracks. Their description resembles that of a raptor bird. The Delaware people have a legend about great monsters that once inhabited the earth. They say that tracks were left by the greatest of these monsters when he walked across the land.  Some footprints might be represented in petroglyphs. Such is the case for "tracks" found in granite rock in several areas of southern New England. Granite was never a soft, muddy consistency, so creatures wouldn't have been able to leave footprints in it. Thus, it is believed that Native peoples, perhaps intrigued by tracks they had seen elsewhere, might have carved these petroglyphs into the granite, but we will never know for certain.