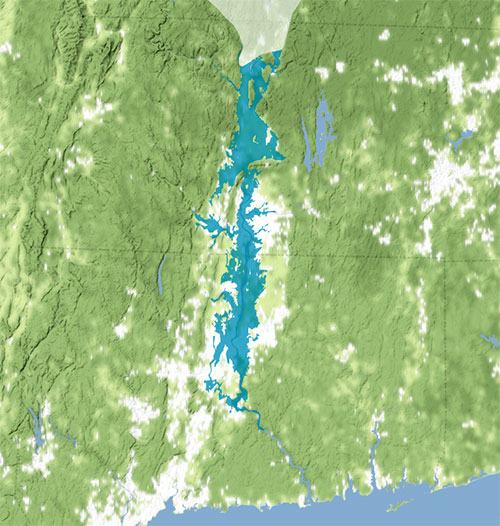 The light horizontal lines show present-day borders of Rhode Island, Connecticut, and Massachusetts. The glacier has retreated to the approximate site of Turners Falls. Connecticut had been free of ice for 2,000-3,000 years at this point. Image courtesy of Joe Kopera, Geologist.

No one alive has ever seen Glacial Lake Hitchcock, but thousands of years ago it filled the valley where the Connecticut River now flows in Vermont, New Hampshire, Massachusetts, and Connecticut. Native American oral histories have stories about a lake in the Connecticut River Valley thousands of years ago, which concurs with geological evidence. In 1818, Edward Hitchcock remarked that he had seen lake deposits between the valley towns of Gill and Holyoke, Massachusetts. In 1935, when geologists were conducting further studies of the valley’s glacial history, which included these and more remnants of the lake, geologist Richard Lougee named the lake in his honor.

The lake was created from the meltwater of the last advance, called the Wisconsin stage, of the Laurentide Ice Sheet that covered much of the northern hemisphere three times between 2 million and 20,000 years ago. As ice accumulates, the pressure of its own weight causes it to flow outward into lower-lying areas, such as valleys and plains. After it reaches its full extent, it eventually will recede. This does not mean that the ice moves backward, but that melting causes the margin to retreat. Spreading and melting are powerful forces. Spreading scours the landscape and carries rock and plant debris with it. Melting leaves the debris behind. It is this process that resulted in the lake deposits that Hitchcock saw.

As the Laurentide melted back for the final time, starting during a warming period about 20,000 years ago, it created the Great Lakes, the Niagara River, and at its furthest extent in the northeast, Long Island, which is composed of glacial moraine. In the region where Hitchcock lived and worked, melting created lakes Connecticut, Middletown, and Hitchcock, and similar lakes in the Hudson Valley to the west and the Merrimack to the east. After existing for a long period, lakes Connecticut and Middletown drained first. The water in Lake Hitchcock was held back by a large pile of rock debris around what is now Rocky Hill, Connecticut. The view of the lake and glacier would have been similar to what is seen on an Alaskan cruise today, with chunks of ice calving off the glacier into brilliant turquoise water, a color that results from the suspended silt and clay sediments.

These sediments settle to the bottom of the lake, creating varves. Because silt sediments predominate in summer and clay in winter, a pair of varves indicate one year of deposition. In 1922, a Swedish geologist named Ernst Antevs counted varve layers at locations from Hartford, Connecticut, to St. Johnsbury, Vermont, and determined that Lake Hitchcock had existed for nearly 4,000 years. Geologists now consider that this was from about 15,500 to 11,500 years ago.

Around 13,500 years ago, the dam in northern Connecticut broke through and the lake basin south of the Holyoke Range in Massachusetts drained out, creating the lower 50 miles of the Connecticut River. The earlier interpretation was that Lake Hitchcock drained all at once, but now geologists have evidence that it drained in stages. By the time the southernmost margin of the lake had receded to the Vermont and New Hampshire border, the large glacial lakes in Connecticut had been gone for 2,000 years. It was also thought that at its largest extent, Lake Hitchcock was 185 miles long, but it may be that those lake margins are for different time periods. By 8,000 years ago, the Laurentide had shrunk to cover only parts of Quebec and Labrador.

When a glacier leaves an area, the landscape is a treeless tundra, but eventually plant life comes back. Reforesting has a predictable succession of spruce, pine, and hardwood trees, and with plant life come animals in search of food and new habitats, and later come humans. Archaeological excavations and Native American oral histories show that there were people living in the Connecticut River Valley in Massachusetts as far back as 10,000 years ago.