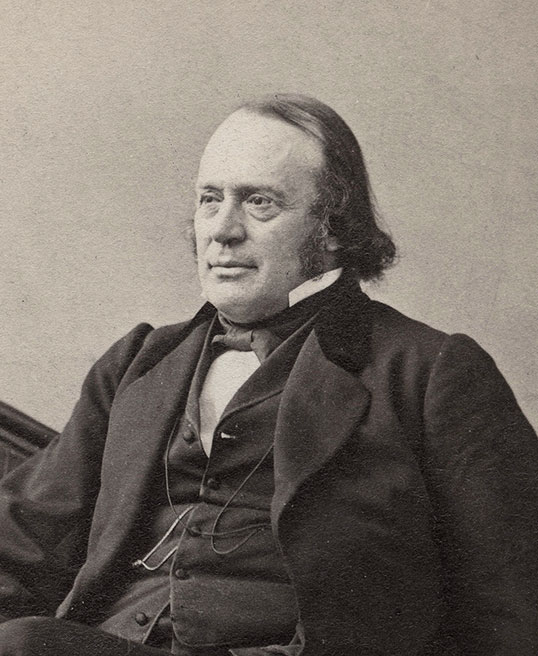 Louis Agassiz was a Swiss zoologist, geologist, and teacher. After training in medicine and natural history at universities in Zurich, Heidelberg, and Munich, he established an international reputation for his research on fossil fishes. In 1832, he studied in Paris with the brilliant traveler and polymath Alexander von Humboldt and the eminent zoologist, anatomist, and taxonomist Georges Cuvier. Agassiz so impressed Cuvier that, after the elder man’s death in 1833, he was invited to stay in Paris to continue Cuvier’s work. Instead, Agassiz returned to Switzerland for a professorship created for him at von Humboldt’s suggestion at the Universite de Neuchatel.

Through his studies of glaciers, he made a name for himself in the world of geology. In 1836, his friend Jean de Charpentier—a superintendent of mines twenty years his senior—showed Agassiz glaciers at Chamounix and Diablerets in the Swiss Alps. De Charpentier and his friends Ignatz Venetz and Karl Schimper, a botanist, had become convinced that glacial action was responsible for certain geological features, and that Europe had once been covered in ice, for which Schimper coined the term Eiszeit, or Ice Age. When de Charpentier proposed this scenario in 1834, the idea was ridiculed. He invited others to see the evidence with him, which was the purpose of the tour with Agassiz. Quickly convinced, Agassiz went on to study glaciers in other parts of continental Europe and Britain. He published the first detailed treatment of the topic in 1840, not waiting for de Charpentier to publish his own work first. Agassiz initially gave some credit to de Charpentier and Schimper, but increasingly felt that his own greater efforts deserved more credit.

Benjamin Silliman’s American Journal of Science was Agassiz’s conduit to American scientists. Through connections he had nourished with powerful men in the scientific world, including Charles Lyell, he secured funds to tour America, sailing for Boston in September 1846. Although still married, his wife had separated from him, so he traveled alone. He planned to stay for two years, but he took a professorship at Harvard College in 1847 and in sank his roots in American soil permanently in 1850 when his wife died and he was free to marry Elizabeth Cary Cabot. She was an active partner in his research life and after his death became the first president of the Harvard Annex, a school for women that she transformed into Radcliffe College.

In 1859, Agassiz founded what is now called the Museum of Comparative Zoology, at Harvard. He was a member of the Boston Society of Natural History, a founding member of the National Academy of Sciences, and a regent of the Smithsonian Institution, then fairly new. His friends included the most eminent personages of the day in America and Europe. As an educator, Agassiz popularized science among the general public and was a celebrated speaker. After a lifetime of vigorous good health, he died on December 14, 1873, only 66 years old. A boulder from Switzerland marks his grave in Mount Auburn Cemetery, in Cambridge, Massachusetts.

His reputation today has been damaged by racists views he held, based partly on his antagonism toward evolution and belief that all human races (never very carefully defined) had been created separately—and unequally—by God.