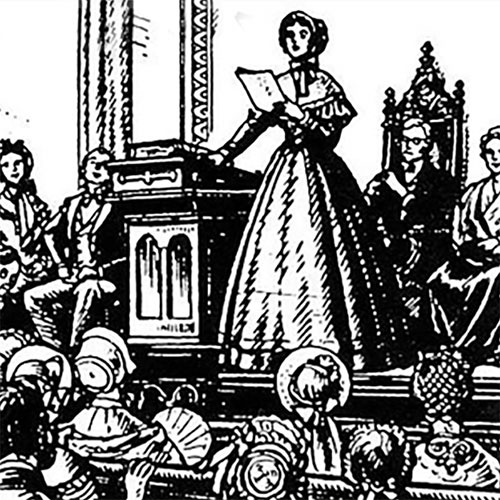 The movement was part of a wave of optimism surging across the new nation upon the ratification of the Federal Constitution in 1788. Millions of Americans shared the heady belief that the new republic would be a bastion of free government and society. In so doing, they rejected forever the hierarchical, patriarchal society of the previous century. In its place rose new, voluntary forms of association. Americans, observed the French traveler Alexis de Tocqueville, "are forever forming associations…of a thousand different types… Americans combine to give fetes, found seminaries, build churches, distribute books, and send missionaries."

Foreign observers remarked with amazement on America's leveling spirit, the democratic impulses that swept away old customs and usages for the new belief that one (white) man was as good as another, regardless of his birth. Inequalities of wealth abounded but what mattered most to Americans in this period was the perception that all men could succeed on their own merit. Voting requirements based on property and other measures of wealth fell by the wayside as the right to vote expanded to include virtually all white males. This radical vision of equality did not extend to African Americans, Native Americans, women and many other Americans in this period, however, who continued to suffer under political exclusion and economic exploitation and, in some cases, lost suffrage and other rights of citizenship.

At the same time, reform movements proliferated as their proponents claimed the political, social and economic promises of the American Revolution for themselves or on behalf of others. Women were involved in virtually every social and political reform of the era. They were at the forefront of the academy movement, thereby providing a generation of young women access to education in literature, science and the decorative arts that had not hitherto existed. Deerfield Academy’s early preceptresses (headmistresses) increased enrollments, and Orra White, herself a product of an academy education, taught the sciences as well as decorative arts. In 1837, Mary Lyon founded Mount Holyoke Seminary, which would become the first female college. Women were instrumental in driving a national temperance movement. They brought similar energy, organizational expertise and tireless advocacy to the antislavery movement (and its more radical incarnation, abolition), the Sunday School movement, the missionary movement (as supporters and as participants), and innumerable local benevolence and charitable societies.

By the 1840's, some women were increasingly convinced that the vote was necessary for them to be truly effective advocates for the reforms they championed. In 1848, a group gathered at Seneca Falls, New York. During a two-day convention, they produced a Declaration of Sentiments, consciously based on the American Declaration of Independence. In addition to claiming the right to vote, the members of the convention also declared, "being invested by the Creator with the same capabilities, and the same consciousness of responsibility for their exercise, it is demonstrably the right and duty of woman, equally with man, to promote every righteous cause, by every righteous means; and especially in regard to the great subjects of morals and religion…”

Not all women felt the vote was necessary. There is no evidence, for example, that Orra White Hitchcock or Mary Lyon supported extending the franchise to women. Some felt the fight to end slavery took precedence over the suffrage issue. During Reconstruction following the Civil War, support fell away among those who decided to step back from women’s voting rights to advocate exclusively on attaining and protecting suffrage for African American freedmen. Others vehemently disagreed, and the women’s movement divided over this and other issues.

These disagreements tended to center on strategy and means rather than deep-seated philosophical or political differences on the equality of men and women. Women who advocated for equal rights under the law for all men and women throughout their lives were thus part of a larger movement that would culminate in the successful fight for the vote in the next century.