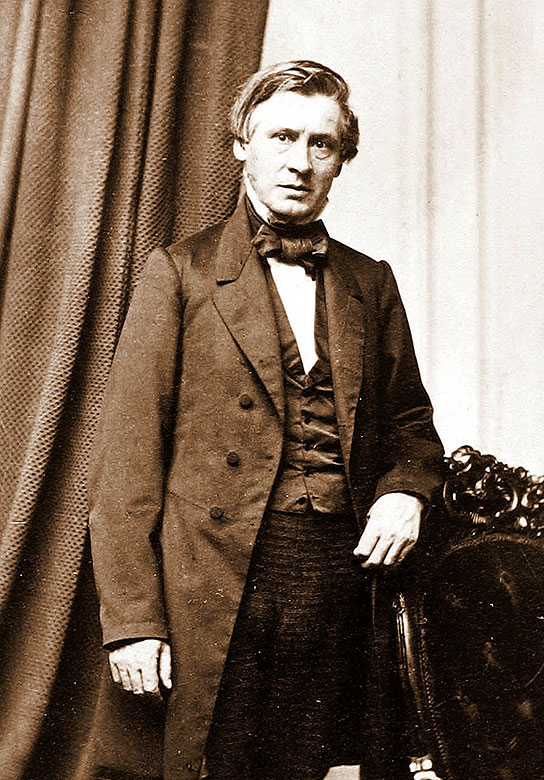 Photograph taken in 1864 by John A. Whipple. Image courtesy of University of South Carolina.

In his time, Gray was the foremost botanist in America. In W. G. Farlow’s “Memoir of Asa Gray”, read before the National Academy of Sciences on April 17, 1889, he described a problem:

“Botanists themselves needed some one who could bring together the scattered materials of the early explorers and harmonize the writings of earlier botanists into a compact and comprehensive whole; one who could settle authoritatively doubtful points of nomenclature; who could describe species tersely and clearly so that there might be a good general account of the flora of North America comparable with similar floras of Europe.  The public needed some one to tell them what botany itself was and what botanists were doing.” According to Farlow, Asa Gray was just the right man at the right time to fix this problem.

Gray was born in Sauquoit, NY, in 1810.  He was the oldest child of farmer and tanner Moses and Roxanna Howard Gray. In 1829 Gray began his studies at Fairfield Medical School and while there he created an herbarium and began corresponding with two well-known natural scientists, Lewis C. Beck and John Torrey. In 1833, he moved to New York City to be an assistant to Torrey, who taught chemistry but shared a strong interest in botany with Gray. That position lasted only a year and then in 1835, Gray became the curator and librarian of the Lyceum of Natural History in New York City. He published his first botanical paper, “Monograph of the North American Species of Rhynchospora”, that same year. This was followed by Elements of Botany, a textbook published in 1836, and by then he and Torrey had begun collaborating on Flora of North America, a two-volume set completed in 1843.

In 1842, Gray moved to Cambridge, Massachusetts, to become Fisher Professor of Natural History at Harvard College. During his time at Harvard, Gray created a botanical library and a herbarium which, by 1865, contained approximately 200,000 specimens, making it the foremost herbarium in America.

American botanists sought him out—including, at one time, Edward and Orra Hitchcock—but his reputation extended overseas as well. In 1855, Charles Darwin wrote Gray for advice about applying his system of “variation” to the study of plants. Gray was a deeply religious man whose beliefs might have put him in opposition to Darwin’s evolutionary theories, but this was not the case. The men made a lasting friendship undiminished by their disagreements, and Gray became Darwin’s strongest American defender when On the Origin of Species was published.