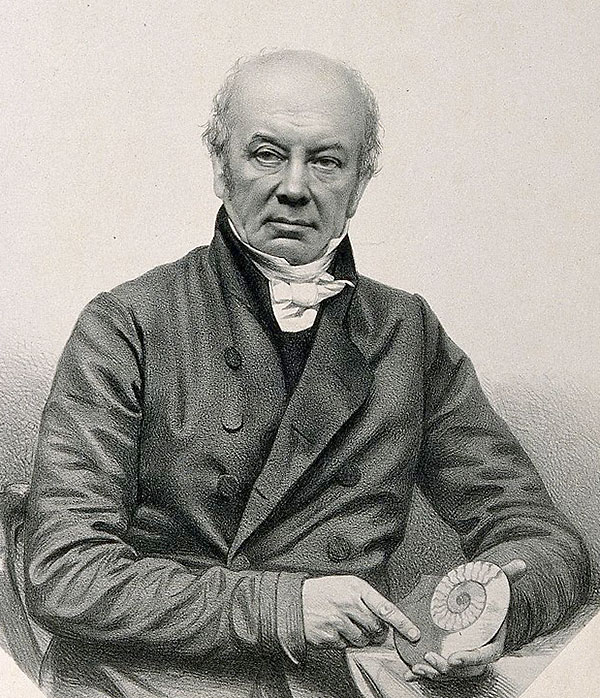 William Buckland was born in Axminster, Devon, England. He developed an interest in geology at an early age when his father and he used to collect fossils on their walks through local quarries. Buckland attended Oxford University and eventually became the university’s first reader (a senior rank based on research) in geology and later became a reader in mineralogy as well. He also became an ordained Anglican priest, served as dean of Westminster Abbey, was the curator of collections at Oxford University’s Ashmolean Museum, and served as president of the Geological Society of London. He helped form the Geological Survey of Great Britain and also helped establish the School of Mines and the Mining Records Office.

Buckland strove to lecture on paleontology and geology at Oxford as much as possible and was known for incorporating the use of specimens, diagrams, and maps when he lectured. He is perhaps best known for having discovered the bones of a large creature that he named the "Megalosaurus". This would later become known as the first discovery of a dinosaur.

As a theologian, Buckland published in 1820, “Vindiciae Geologiae; or the Connexion of Geology with Religion explained”. He believed the Noachian Flood was universal and theorized that between the beginning of the earth and current times new life forms were created through a long series of “revolutions”. Earlier understandings were that the bones found in England of animals such as elephants, tigers, and hyenas, etc., had been carried there during the Flood from other parts of the world, but Buckland argued that these animals had existed in England too, and studying their bones would provide information about the creatures on earth before the flood.

In 1836 Buckland wrote the entry on geology and paleontology for the Bridgewater Treatises, a series of books in which prominent religious and scientific figures demonstrated how the sciences and the Christian Bible were in harmony with one another. He included in it reference to Edward Hitchcock’s paper about the tracks found in the Connecticut River Valley. Buckland believed in Hitchcock’s theory of the tracks’ origin at a time when many other scientists remained skeptical.

In 1825, he married Mary Morland, who was herself a fossil collector and an illustrator, having created fossil illustrations for the well-known French naturalist Georges Cuvier, among others. The Bucklands spent a year on a geological honeymoon throughout Europe.

Buckland was friendly with Mary Anning, the fossil collector of Lyme Regis. When the French anatomist Georges Cuvier suggested that Anning may have used bones from different animals to fake her discovery of the first Plesiosaur ever found, Buckland and his wife defended her. Mary Buckland sketched the skeleton, based on Mary Anning's own sketch, and William and his colleague William Conybeare argued that the unschooled fossil collector was correct. After that, Buckland continued to treat Anning with respect, including citing her in his papers. When she became ill, Buckland persuaded the British Association for the Advancement of Science to give her an annuity for her many contributions to British paleontology.

William Buckland’s own health started to fail in 1849. By the time the Hitchcocks came to visit in 1850, he was in an asylum. He had already chosen a spot to be buried, but it turned out to be over an outcropping of Jurassic limestone that had to be blown apart with explosives before his grave could be dug.

A student in 1820 had written a little poem about Professor Buckland that the Bucklands liked very much:

Where shall we our great Professor inter
That in peace may rest his bones?
If we hew him a rocky sepulchre
He'll rise and break the stones
And examine each stratum that lies around
For he's quite in his element underground.