The Feminine Role in Coloring Maps 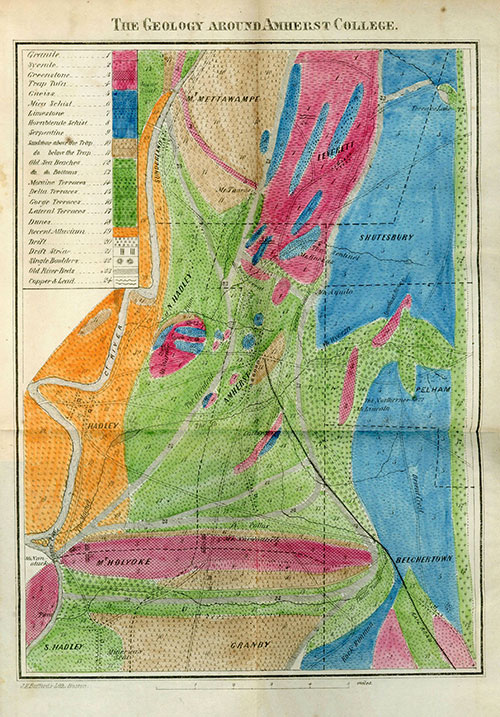 An educated middle-class woman who was interested in geology during much of the 19th century was not likely to go out into the field to map its rock strata and formations. It would be unladylike to do all the necessary clambering around the rocks, and possibly dangerous to herself to be alone in the field. But she could draw maps and color them in, and if she had attended an academy, she probably would have had training in drawing, painting, and cartography. Before and after they married, Edward Hitchcock geologically surveyed a territory and sketched the map that Orra White Hitchcock then redrew and colored for him. While she often accompanied him into the field and "took views" (sketched landscapes), she is not known to have done geological mapping herself.

Before the advent of color printing, anything to appear in color had to be done by hand. A letter from Benjamin Silliman to Edward Hitchcock in 1829 discusses the production of Orra's drawings for an article: "Will lithography do? If it will you may send them at once in my care to the Messrs Pendleton's, Boston. Should they not then be done on sized paper? so that they can be coloured? If Mrs. H can do them I should be obliged & she must not be offended if I pay for them as I would elsewhere." This letter was addressed to Edward, who handled such worldly business for his highly capable wife. The apologetic mention of payment shows that it was considered unusual to pay a woman of Mrs. Hitchcock's married, middle-class social status.

Sometimes Orra Hitchcock did a single large map, but for journal articles she might have hundreds of copies in which she had to paint the colors one by one. Thus, comparing the same map in different copies of a given journal will have minor differences that show the handmade nature of the enterprise. Usually, the colors remained the same from map to map, differing only in intensity and possibly brush strokes, but occasionally, if the colorer ran out of a color, a new one would be substituted. Maps were often inserted as double fold-outs (folded "up and down & also right left"), so could be quite large and time consuming to produce.

Hand-coloring maps was a small business opportunity for poorer women who needed to earn a living. In the instance mentioned above, "Mrs. H." declined the chore, and the work was given instead to Miss Doolittle in New Haven, whose father was an engraver and who earned her living by such work. Orra did the first one, deciding on which colors were to be used, as a model for Miss Doolittle to follow.

Silliman and Hitchcock discussed paying Miss Doolittle to color 2,000 copies of a map for the American Journal of Science. Miss Doolittle's father had died, so the money was important to her. With such a large order, she had to hire two "female assistants" to help her. She asked $12 per 100 copies. Hitchcock counter-offered $3 per 100, which Silliman thought too low, but left it to Hitchcock to "make her such additional remuneration as you think just & reasonable." Clearly, coloring was not a lucrative business, and women like Miss Doolittle had to learn to negotiate price.