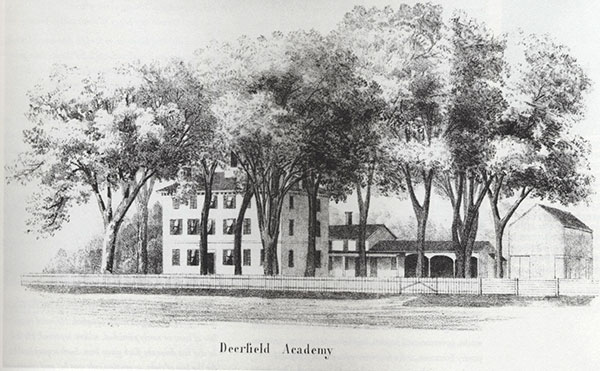 The story of the founding of Deerfield Academy in Deerfield, Massachusetts, is closely related to the town’s longstanding interest in educating boys and girls beyond the basic literacy taught in the free, one-room schools typical of New England communities by the mid-1700s. As early as the 1770s, special evening schools offered Deerfield boys instruction in higher-level mathematics, and the town’s minister often boarded young men preparing for college entrance exams, tutoring them in Latin, Greek and Hebrew. In the late 1780s, a group of Deerfield residents incorporated to found a town school for the sons and daughters of parents willing to pay tuition for more advanced, intensive instruction.

This co-educational experiment was the genesis for Deerfield Academy, incorporated in 1797, and built on land acquired for that purpose in the southeast part of the village. The impressive two-story building, designed by the American-born architect Asher Benjamin, was the first brick structure in the town. Chartered by Governor Samuel Adams in 1797, and funded by money raised through private subscription, the academy opened on January 1, 1799. It has remained in operation ever since, except for a brief period during a severe economic recession in the late 1810s.

The new school offered an ambitious curriculum that included instruction in the liberal arts and sciences. According to a letter written by the first preceptor (headmaster) Claudius Herrick, six months after it opened, the academy was “an elegant Edifice, having, on the lower floor, four rooms, one for the English school, one for the Latin, & Greek school, the Preceptor's room, and a room for the Museum and Library. The upper room, being all in one, is used for examinations, and exhibitions.”  A "cabinet" (museum) of shells, minerals and other objects engaged and instructed students in natural history, and a benefactor donated funds to purchase the latest top-of-the line equipment from London to teach astronomy.

The new academy actively recruited students throughout the region, both locally and from towns as distant as Charlestown, New Hampshire, and Springfield, Massachusetts. The student body in these early years ranged widely in age, from as young as ten, with the oldest pupils in their early twenties. The academic year was divided into quarters of approximately four months. No degrees were conferred; students were billed for each quarter with extra fees assessed for special subjects such as art and music. Of the 70 students who attended the second quarter in 1799, Mr. Herrick proudly shared that “two thirds were from out of town; the children of Gentlemen, from all the neighboring towns. We had upwards of 20 In Latin & Greek; between 20 & 30 young Ladies, studying English Grammar & Geography. I will assure you, Sir, we have no small number of young gentlemen, and ladies, in the Academy whose society is very agreeable.”

Herrick’s description highlighted Deerfield Academy’s decision to educate both male and female pupils in the same institution, although the trustees were clearly determined to keep the young men and ladies in their charge separated as much as possible. More typical was the commitment to female education beyond basic literacy. “Let the ladies of a country be educated properly,” argued Dr. Benjamin Rush, and they will “form its manners and character.” (For a more general discussion about early academies, see the backdrop for "The Academy Movement.") Mr. Herrick assured his correspondent that, “The next quarter we expect a larger school” and that "A larger number of Ladies expect to attend. (An important change!)”

Despite Claudius Herrick’s optimistic prediction, boys continued to outnumber girls during the school's first few years. The trustees’ decision in 1803, to hire Eunice Woodbridge as preceptress to boost female enrollment achieved the desired effect:  it increased dramatically. As “a Lady of most respectable character,” Miss Woodbridge was charged with making sure the young ladies received a superior education in reading, writing, geography, and English grammar, and offered drawing and embroidery for an additional fee. In the same year, the Deerfield Church voted to permit the school to build pews in the upstairs gallery portion of the meetinghouse for their students, with separate pews for male and female pupils.

The academy was clearly a success and quickly outgrew its fashionable new building. Only 11 years after it opened, a third floor and an addition were built onto the original structure to accommodate male boarding pupils as well as a barn, chaise house, and other outbuildings. A fence was erected from the middle of the window west of the front door to the lane fence, to separate outdoor recreation space for male and female students.

The academy continued hiring female instructors, appealing in the process to families seeking more advanced education for their daughters at a time when colleges remained closed to women. Among the faculty recruited in this period was an intellectually and artistically gifted young woman from nearby Amherst, Massachusetts, Orra White. She was only 17 years old in 1813, when the trustees hired her as the new preceptress.  She taught astronomy, painting, drawing, botany, and cartography until 1818, and three years later, she would marry a fellow teacher and colleague, Edward Hitchcock.

The school thrived under the leadership of Edward Hitchcock and Orra White. The curriculum expanded to include additional subjects in the sciences including astronomy, geology, and botany. They introduced active, experiential learning that presaged the materials they would create to support Edward's research and teaching in geology and ichnology when he joined the faculty of Amherst College. Orra combined instruction in the sciences with painting and other decorative arts. Edward made good use of the academy's fine collection of scientific instruments but also designed his own apparatus to demonstrate scientific principles in the classroom, including a wooden model customized to the latitude and longitude of Deerfield to predict eclipses in the region. The pair also collaborated in writing and producing a play performed by faculty and students titled, Emancipation of Europe, Or, The Downfall of Bonaparte.

The institution's fortunes fluctuated in time with the economic ups and downs of the region and nation. In 1875, a generous bequest from a town resident for a free academy and town library enabled the building of a new edifice at its current location in the village center for both Deerfield residents and out-of-town students. The school sold its original home to the Pocumtuck Valley Memorial Association and the former academy building re-opened as the Memorial Hall Museum in 1880, which the PVMA continues to oversee and operate. In 1880, graduates of the new, jointly administered Dickinson High School and Deerfield Academy received the first high school diplomas ever conferred in Deerfield.

In 1902, the town hired Frank Boyden, an energetic young headmaster. Under his leadership the town high school and the academy separated. Deerfield built a high school in South Deerfield and the academy once again became an entirely private school. In 1948, Deerfield Academy ceased admitting young women and became a single-sex institution. Co-education was re-established in 1989. Today, Deerfield Academy is an independent, college preparatory school with more than 120 faculty and a student body numbering over 600 day and boarding students.