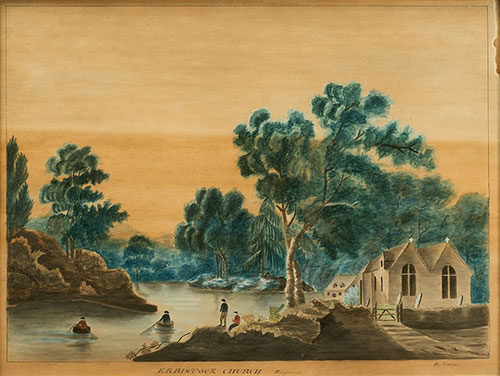 In a series of public talks about the changes between the pre-revolutionary society of his youth and modern America of 1839, Epaphras Hoyt of Deerfield saw a great difference in female education. Hoyt recalled that, “Female Education . . . was very limited in my early days.” He may have been thinking of his own sisters and wife when he declared that Deerfielders of the 1770's and ‘80's thought women’s education needed to go no farther than basic literacy and the ability to perform the myriad essential household tasks of the 18th century home. Hoyt explained that the basic premise of female education in those earlier days rested on the assumption that “it was sufficient for women to be well acquainted with domestic business, such as home manufactures, and the management and government of their families when they became mothers, they were by no means deficient in the useful branches; and many such mothers were the pride of their children.”

Epaphras Hoyt and other New Englanders observed first-hand a dramatic change in female education at the turn of the 19th century. Hundreds of private academies sprang up in the decades following the American Revolution, many of them either co-educational or exclusively female. In addition to instruction in core curricula such as reading, writing, grammar, literature, geography, and mathematics, female academy education also typically offered opportunities to attain female “accomplishments” that included embroidery, drawing, painting, dancing, and music. These additional classes were in high demand despite the extra fees charged for instruction and materials. Female pupils and families considered these skills not merely ornamental but truly useful accomplishments, part of an essential curriculum for women aspiring to be educated and refined female citizens of a rising republic.

Academy instructors were supposed to help students cultivate and improve their natural sense of taste. As the Scottish clergyman Alexander Gerard explained in a famous essay on the subject, “A fine Taste is neither wholly the gift of nature, nor wholly the effect of art. It derives its origin from certain powers natural to the mind; but these powers cannot attain their full perfection, unless they are assisted by proper culture.” Being able to appreciate natural landscapes and even reproduce fine art with skill and taste was a hallmark of an accomplished young woman. Embroidering or painting an illustration from literature was often a source of inspiration for young ladies. The exercise not only required artistic skills, but also enabled the maker to display her familiarity with historical, moral, or religious subjects. Rebecca Jackson painted Erbistock Church, which is in Wales, where she had never visited, based on an aquatint made by an English printer, Francis Jukes, of the actual painting by an Irish-born artist, Thomas Walmsley, thus also demonstrating a degree of worldliness.

The Connecticut River Valley was one of the most important regions for the teaching and production of schoolgirl embroidery. Caroline Stebbins, who attended several terms at Deerfield Academy, simultaneously displayed her patriotism, refinement, and embroidery skills when she undertook a challenging silk-on-silk embroidery of George Washington's home at Mount Vernon, Virginia. The five dollars her proud father paid for the frame in which her embroidery would hang, presumably on the wall of the family parlor, equaled half a year's tuition at the academy.

Women’s artistic efforts were not confined to embroidery and painting. Cartography, or map making, required artistic skill as well as knowledge of geography, literally illustrating the 19th century curriculum’s blending of intellectual content and the ornamental arts. Having students draw maps was a common method for teaching geography in the early 1800's. Students might be assigned the task of accurately copying a map from an atlas or other printed source. Because drawing was commonly considered a female accomplishment, female instructors often taught geography. Emily Hill, a talented instructor at the Cony Female Academy in Augusta, Maine, is believed to have been the creator of an extremely well-executed wall map for her classroom, and a number of her students also produced impressively detailed and accurate maps. Harriet Goodhue (1799-1874) was about fifteen years old when she drew a world map for her course in cartography at Deerfield Academy. It may have been a final requirement that signaled her successful completion of the course.

The appointment of Orra White as the Preceptress of Deerfield Academy in 1813, epitomized the seamless integration of instruction in academic subjects and the decorative arts. Orra taught “exact science”, including natural history, cartography, and astronomy, as well as drawing, painting, and other ornamental arts. A skilled artist who excelled in botanical illustrations and landscape studies, She united her formidable expertise in botany and natural history with sensitive-yet-accurate treatments of plant life and aesthetically pleasing drawings of geological formations and scenic landscapes. Her expertise in art and science would prove invaluable in a long-lasting collaboration with her future husband, Edward Hitchcock.