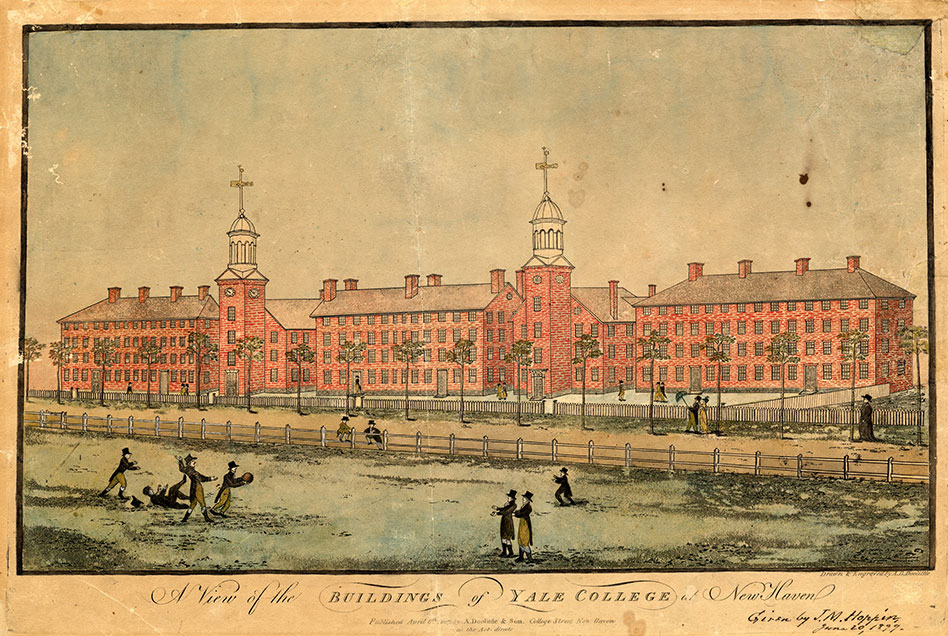 A View of the Buildings of Yale College at New Haven, 1807., Image courtesy of Yale University buildings and grounds photographs, 1716-2004. Manuscripts and Archives, Yale University.

Yale’s beginnings go back three centuries, when the colony of Connecticut decided in 1701, “to erect a collegiate school...wherein Youth may be instructed in the Arts and Sciences who through the blessing of Almighty God may be fitted for Publick employment both in Church and Civil State.” Before that time, Harvard College, founded in 1636, in neighboring Massachusetts Bay, was the traditional destination for New England’s ministers, lawyers and merchants.

The "Collegiate College", as it was then called, was located in a number of Connecticut towns before settling in what proved to be its final home in New Haven. In 1718, the Reverend Cotton Mather and other friends of the fledgling college approached a wealthy English merchant, Elihu Yale, for help in paying for a new building for the school. The new building and, later, the school itself was renamed Yale College.

Like Harvard and other early American colleges, Yale focused intensively on ancient languages and classical studies in Greek, Latin and Hebrew. As an orthodox Calvinist institution, Yale appealed to more theologically conservative New Englanders who welcomed an alternative to Harvard College faculty and curriculum some feared were growing too liberal. Meanwhile, Yale students and alumni were in the thick of the religious and cultural movements of the 18th century. Many, including the Reverend Jonathan Edwards, played an active role in the intensive religious revivals of the First Great Awakening that would challenge ecclesiastical authority throughout the colonies.

Yale continued to grow, establishing a separate divinity school in 1820, and a law school in 1824. The college demonstrated an early commitment to the sciences when it appointed one of its alumni, Benjamin Silliman, the first professor of chemistry and natural history, in 1802. Silliman’s pioneering research in geology and collection of geological specimens made him the perfect scholar to be a mentor, and later a respectful colleague, to Edward Hitchcock. Yale continued to expand its science faculty and research throughout the 19th century; physics was among the first three Ph.D.s awarded in the United States at Yale in 1861.

The small college founded in 1701, is today attended by more than 5,000 undergraduates and 6,000 graduate and professional students.