The American Journal of Science 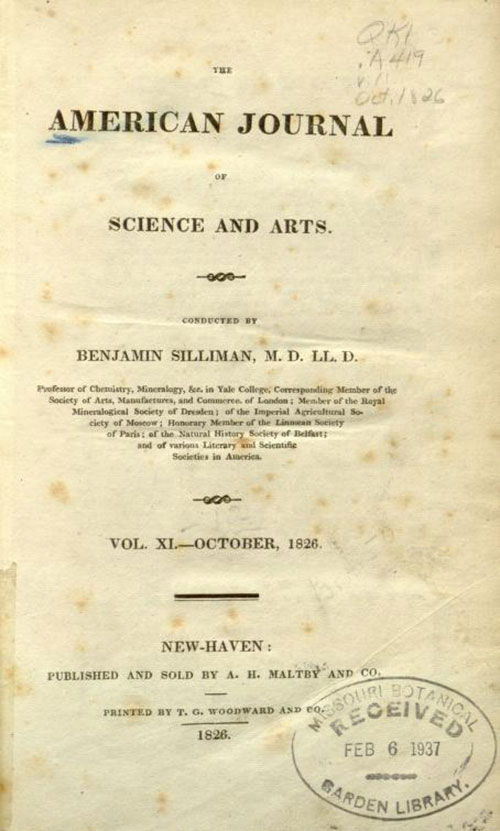 The American Journal of Science is the oldest continuously published scientific journal in the United States. From its founding in 1817, the journal benefited from the energy and financial support of its first editor, Professor Benjamin Silliman of Yale College. Members of the Silliman family would continue to edit the magazine into the 20th century.

Silliman’s introduction in the first issue informed readers that the new magazine was to be a “Journal of Science, more especially of Mineralogy, Geology, and the Other Branches of Natural History, Including also Agriculture and the Ornamental as Well as Useful Arts.” The energetic editor solicited communications and essays on every conceivable scientific topic, including “Military and Civil Engineering, and the art of Navigation, Comparative Anatomy and Physiology, Meteorological Registers, and Reports of Agricultural Experiments” as well as “interesting Miscellaneous Articles.” Last but not least, Silliman encouraged connections between "scientific inquiry in the service of Music, Sculpture, Engraving, Painting, and generally on the fine and liberal as well as useful arts.”

Even in its early years, it was frequently referred to as "Silliman’s Journal.” Although it lost money initially, he never lost faith in its promise. The most prominent scientists of the day were frequent contributors and readers. Silliman also actively sought contributions both “from men of science and from men versed in the practical arts.” In the case of the controversy between James Deane the physician and Edward Hitchcock the geologist, the Journal became a battleground as each man demanded the credit for discovering fossil footprints in the Connecticut River Valley. Throughout the heated debate, Silliman “endeavored to maintain the impartiality of an editor & a mutual friend . . . with both parties” but hoped “that such unpleasant topics should not be kept alive from volume to volume in my publication.”

In its inaugural issue, Silliman accurately predicted that “No future historian of American science will fail to commemorate this work as our earliest purely scientific Journal, supported by original American communications.”  Today, the American Journal of Science publishes articles from around the world devoted to research in the earth sciences.