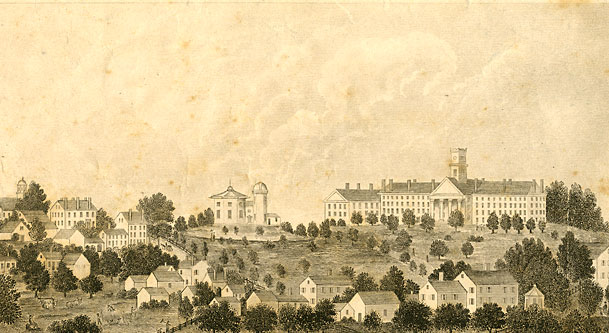 In 1814, the town of Amherst, Massachusetts, opened the co-educational Amherst Academy. Attracted by its reputation, many families chose to send their sons and daughters there; the student body included Mary Lyon, who subsequently founded Mount Holyoke Female Seminary (later Mount Holyoke College), and the poet, Emily Dickinson. Many of the same trustees and interested citizens joined together again to found a college with the goal of educating poor young men to help prepare them for the ministry. Emily Dickinson's grandfather, Samuel Fowler Dickinson, was a devout Congregationalist and he and other citizens, including the dictionary publisher Noah Webster, helped to lead the founding. Another was the Reverend Zephaniah Swift Moore, a Congregational minister who served as president of Williams College for six years until he left to become the new college’s first president. Some Williams faculty and students chose to accompany Moore, igniting in the process a rivalry between the two institutions that persists to this day.

Its cornerstone was laid in 1820, and “The Collegiate Institution, Amherst, Massachusetts” admitted 47 students in 1821. In 1825, it received a state charter and took the name "Amherst College", for the town in which it was located. It is the third-oldest college in the state of Massachusetts.

Both Amherst Academy and Amherst College were known as theologically conservative schools and early presidents of Amherst were strong Calvinists. A number of graduates pursued missionary work, both in the United States as well as abroad. When Amherst’s second president resigned in 1845, the trustees turned to Edward Hitchcock.  An orthodox Congregational minister with a strong interest in natural history and science, Hitchcock had joined the faculty in 1825, at the age of 32 as Professor of Chemistry and Natural History. As its president, Hitchcock played an important role in placing Amherst College on a firmer financial footing as well as expanding its research and teaching capacities in the sciences, while maintaining its reputation as an orthodox Congregational institution. Among the leading American geologists of his day, Hitchcock, until his death in 1864, refused to recognize any irreconcilable conflict between science and the conservative religious beliefs he maintained.

From a total student body of 47 students in 1821, Amherst College today has over 1,700 undergraduates representing 49 states, the District of Columbia, and 54 countries. It has been co-educational since 1974, and is numbered among the finest private liberal arts colleges in the United States.