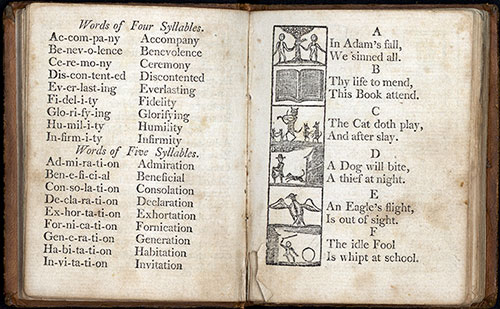 In towns throughout early New England, religion and education were inextricably intertwined. The Bible was seen everywhere as a symbol of religious and civil authority, whether in the pulpit during Sunday services, in the hands of the head of the family during evening prayers, on the magistrate’s bench, or on the schoolmaster’s desk. The belief that all people needed to be able to read and understand the Bible for themselves was a hallmark of early Protestantism. The consequence was relatively high literacy rates among early New England Protestants and their European counterparts. Massachusetts Bay Colony required in 1648, that every town of fifty families or more provide a school "it being one chief project of that old deluder, Satan, to keep men from the knowledge of the Scriptures."

Early educational materials drew heavily on biblical references and precepts. Hornbooks for the use of very young children, comprising only one page under a thin sheet of horn to preserve it, typically included the alphabet and the Lord’s Prayer. The next book for many budding readers was The New England Primer. A combined catechism and reading primer, it was the successor to an earlier English schoolbook of 1690, The Protestant Tutor. Myriad editions and millions of copies later, The New England Primer remained in use well into the 19th century and beyond. It is best known for maxims presented as rhyming couplets with accompanying A to Z woodcuts intended to instill biblical literacy and encourage moral virtue in young learners ("A:  “In Adam’s fall, we sinned all”; P: "Peter denies his Lord, and cries”, etc.) Additional content included excerpts from the King James Bible and homilies on obeying the Ten Commandments. Some editions contained the 17th-century catechism by the Puritan minister John Cotton, Milk for Babes. Drawn Out of the Breasts of Both Testaments. Chiefly, for the Spirituall Nourishment of Boston Babes.

As both the most commonly owned and respected book, the Protestant Bible (including the Geneva and King James versions) was both teaching tool and devotional text. Deerfield schoolmasters were typical in relying on the Bible to teach reading. One former pupil who attended in the 1770's recalled, “the chief reading book at school was the Bible which was read in Course by classes; and I well remember the stamering [sic] efforts we made to pronounce many of its Hebrew words, and our hesitancy at some of its indelicate passages and unmodified phrases. The master however sometimes had the discretion to pass over some parts of it.”

Economic and political factors also encouraged literacy as the 18th century wore on. Sending and receiving letters, reading a deed, and keeping accounts all required basic knowledge of reading, writing and arithmetic. The political pamphlet was an important literary form in the 17th and 18th centuries. Widespread literacy allowed colonists to steep themselves in a political ideology that stimulated first an imperial crisis and then a revolution. Through it all, Protestant religion remained a constant in both private and public school instruction.

Bible readings, daily prayers, and regular church attendance were part of the educational experience for students attending one of the hundreds of small private academies springing up in cities and towns across New England in the early 1800's. Deerfield Academy was typical in requiring all students to attend religious services. The school reserved pews at the meetinghouse for the use of pupils and faculty and fined students who missed Sunday, Fast Day or Thanksgiving services.

Religious assumptions and instruction similarly permeated the educational experience in the local common schools (similar to today's elementary schools) that provided the earliest and, for many New Englanders, their only formal education. Carried over from the 18th century, retaining these traditional practices was integral to the vision of Horace Mann, an education reformer from Massachusetts. Mann's groundbreaking approach became a model for public education throughout the United States. He strongly believed universal access to public education would ensure the educated citizenry necessary to sustaining a free government. As Massachusetts’ first Secretary of Education, from 1837-48, Mann gained widespread support for new schools that offered higher quality, standardized education for all children. He also instituted the first schools devoted to training teachers, known as Normal Schools.

A common theme in Mann’s reforms was the need for non-sectarian public education. This did not mean that Massachusetts public schools were devoid of religious instruction. On the contrary, Mann wanted to continue the regular use in classrooms of the Protestant (King James) Bible, the Ten Commandments, and religiously-based works of literature such as John Bunyan’s Pilgrim’s Progress. Steering clear of sectarian controversies that divided Protestant denominations, Mann nevertheless strove to include religious instruction “to the extremest verge to which it can be carried without invading those rights of conscience which are established by the laws of God, and guaranteed by the constitution of the state.”

Like many Americans in the 1800's, including Professor Edward Hitchcock who would become president of Amherst College, Horace Mann pinned his hopes for inculcating the moral rigor and virtues of the good citizen through Christian teachings and more specifically Protestantism: “our [educational] system earnestly inculcates all Christian morals. It founds its morals on the basis of religion; it welcomes the religion of the Bible; it allows it to do what it is allowed to do in no other system, to speak for itself.” The intertwining of Protestantism and public education would persist as Massachusetts, in company with many other states, continued to include reading the Bible in public schools. Not until 1963, would the Supreme Court of the United States rule unequivocally that Bible reading in public schools violated the First Amendment’s establishment clause regarding freedom of religion.