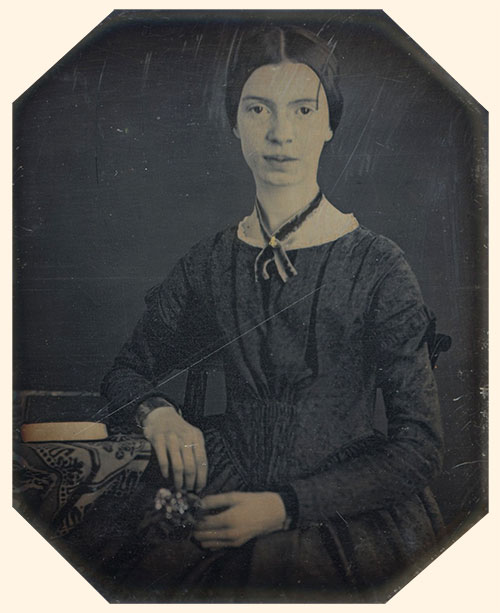 Few American poets are more famous than Emily Dickinson. In recent decades, it has become widely recognized that scientific themes and topics appear in over 200 of the 1,789 poems she wrote. (The total number of poems reported varies considerably, all the way up to 2,357, when certain drafts are counted.) She studied chemistry, astronomy, physics, botany, and geology at various times during her schooling at Amherst Academy and in her year at Mount Holyoke Female Seminary.

Some scientific references in her poems seem clearly drawn from the work of Edward Hitchcock, with whom her family had lifelong professional and personal relations. In "Volcanoes be in Sicily," she expresses the surprising fact that despite appearances to the contrary, there had been volcanic activity in her home town of Amherst, Massachusetts, as evidenced by the basalt ridges nearby:

Volcanoes be in Sicily

I judge from my geography.

A lava step, at any time,

Am I inclined to climb,

A crater I may contemplate,

Like many of her contemporaries, Dickinson wrestled with ambivalence over the domains of religion and science. She grew up in the Congregationalist church, the same denomination as Edward and Orra Hitchcock, but in adulthood stopped attending services. Even though she refused to declare herself for Christ while a student at Mount Holyoke, where public declarations were encouraged, contemplation of God and eternity appear frequently in her poems. An example:

This World is not Conclusion.

A Species stands beyond -

But positive, as Sound -

It beckons, and it baffles -

And through a Riddle, at the last -

To guess it, puzzles scholars -

To gain it, Men have borne

Faith slips - and laughs, and rallies -

Blushes, if any see -

Plucks at a twig of Evidence -

Much Gesture, from the Pulpit -

That nibbles at the soul -

Her poems show such varied responses to God that her true beliefs are the subject of debate among her fans and scholars. One poem may sum them up succinctly:

Faith is a fine invention

When the Gentlemen can see—

But Microscopes are prudent