Poetry and the Middle Class 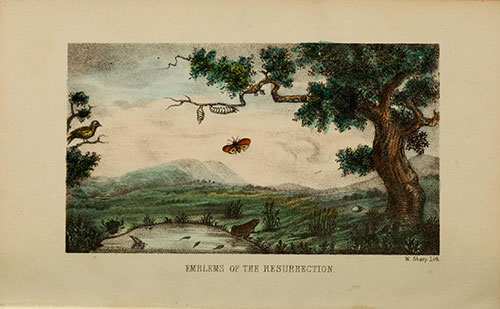 Poetry was a popular art form for 19th-century Americans. Local newspapers regularly printed poems by local contributors. Nature, home life, politics, public affairs, and philosophical musings on mortality and morality were frequent topics. Writing poetry was a sign of refinement among a generally literate public, and because all it required was pencil, paper, and the time to write, many ordinary people channeled their thoughts and feelings into verse, whether or not they ever had it published.

Edward Hitchcock's family may have been a little more poetic than most, but they were not entirely unusual. Justin Hitchcock, Edward's father, had only a basic education and made a meager living as a hatter, but he wrote a lengthy love poem called "A Dream" to his prospective wife, Mercy Hoyt. She was the daughter of a comfortable, well-established Deerfield family, so perhaps Justin thought that a show of cultural polish would elevate him in her eyes. The poem consists of 89 verses of four lines each in iambic pentameter and using an A-B-A-B rhyme scheme. It is an impassioned description of the two of them walking hand in hand through a woods until they get lost. The poem is suffused with the sublime aesthetic, in this case intense emotions of fear, confusion, and joy. The dream ends before there is a conclusion: "In this distress I awoke & found my arm twisted around under my head which caused me extreme pain."

Edward's "Uncle Ep," Epaphras Hoyt, was known as a military historian who took great interest in worldly affairs. In a poem to an unnamed lady, dated 1806, he declared that his duty to "Country" must come first to make himself worthy of her. Seven verses dated 1831-32 show his hatred for the Masons. Hoyt was founder of an anti-Mason newspaper in Deerfield, and wrote the poem during the so-called Morgan Affair, concerning the disappearance of a former member of the Masons who had threatened to expose its secrets. The controversy filtered into politics, because President Andrew Jackson was a member of the Masons, so the topic was of more than casual interest:

"Who'll espouse a righteous cause / To oppose masonic laws. / Let the man who backward draws / Pine in slavery. // Freeman boldly take your stand / Spread the truth throughout the land / Wield the pen with willing hand / Down with masonry."

Edward wrote love poems to Orra and several inspired by his own scientific activities: a song of praise to astronomy after tracing the path of the Comet of 1811 across the night sky, and an ode to the "Sandstone Bird" whose mysterious footprints were preserved in rock. He frequently threw lines from Milton, Wordsworth, or other famous poets into his science writing, even in official reports and journal articles, knowing that his audience had been educated in the same classics as he and would understand the allusions.

A resident of Northfield, Massachusetts, wrote a poem about a tornado that touched down in that town. News of the fossil bird tracks may have inspired a poem by a young woman living in Barre, Massachusetts, about 20 miles east of Amherst. The writer ponders the image of her personal life falling behind her like footsteps in sand that can be washed away by a mere wave. The date (1846), location of the town, and use of footprints as the central motif hint that she may have been inspired by an article or talk by Hitchcock about "bird tracks". She also may have been familiar with Longfellow's poems, "To the Driving Cloud" and "A Psalm of Life," both of which used imagery of fossil footprints.

Poetry was embedded in common discourse. Orra Hitchock used popular poems written by others to communicate religious and social values to her friends, such as the "Good Wife" poem she sent to Lucy Fowler on the event of her marriage. Dr. James Deane wrote a hymn for a celebration in Greenfield. Fossil footprint finder Roswell Field wrote annual 4-line poems on his birthday, starting at age 70. Day laborer and amateur geologist Dexter Marsh left no poems, but had the works of Byron and Shakespeare in his personal library. At his death, a friend of his wife Eunice, probably a church "brother," wrote a poem to console her. It was a religious in nature, mostly about how "D____ M_____" was now in Heaven, but the writer managed to fit in a subtle allusion to Dexter's favorite pastime: "He has left his dear haunts and gone to his rest, / Yet though lovest where often his foot-steps have pressed."