Marks of the Middle Class in 19th Century New England 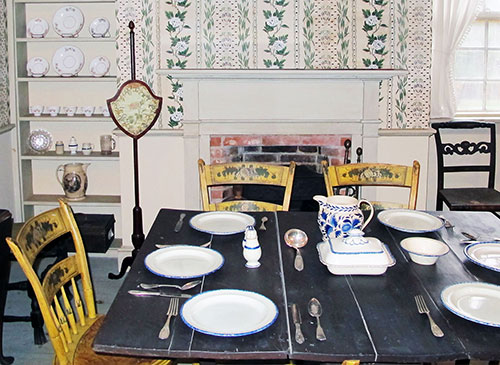 When young Philo Munn confided in his diary in the 1830s, that he “could not but wish to myself that I knew something and was somebody,” he expressed the hopes and anxieties of an emerging middle class that had not existed before the Revolution. By the mid-19th century, the middle class dominated an expanding economy and identified itself through a constellation of possessions and customs that distinguished them from the lower and upper classes.

A strong sense of hierarchy regulated Anglo American society before the American Revolution. Custom and practice confirmed the assumption that each and every person occupied a divinely appointed place, from the mightiest ruler to the humblest subject. This state of human society reflected a larger divine plan, revealed in nature as a "Great Chain of Being". The famous preacher and theologian Jonathan Edwards of Northampton, was typical in celebrating the “beauty of order in society . . . different members of society have all their appointed office, place, and station, according to their several talents, and every one keeps his place, and continues in his proper business.”

It would be hard to overestimate the powerful hold this vision of a divinely inspired “sweet subordination of persons” exerted on 18th century New England society. Family status and connections helped to determine one’s “place,” from the town offices a man should hold, to assigned seating for worship in the meetinghouse. Jonathan Edwards’ cousin, Jonathan Ashley, was only 20 years old when he was ordained as Deerfield’s minister in 1732, but hierarchical and social assumptions of the day ranked the newly minted Yale College graduate among the town's most prominent families. Ashley further enhanced his status by marrying Dorothy Williams, a union that allied him with one of the region’s most powerful families, sometimes referred to as "Mansion People" or "River Gods".

Profession, income and family connections all placed the Reverend Ashley high on the ladder of status in his community and region and he behaved accordingly. By replacing his house’s original large center chimney with two smaller chimneys on either side, Ashley was able to create a stylish center hallway in keeping with the genteel public image he and his family were expected to present. He remodeled the two front rooms to provide an appropriate backdrop for receiving and entertaining visitors and purchased three slaves whose presence and activities also supported the manners and lifestyle expected of Connecticut River Valley elites. The Ashleys were expected to, and did, entertain frequently. The selective, intimate gatherings they hosted provided opportunities for them and their guests to exhibit their mastery of manners and polite conversation at the tea table or in dining.

Social and economic status were intrinsically connected and modes of dress signaled one’s place in the local hierarchy. Epaphras Hoyt, the resident of a rural Massachusetts town recalled in 1839, that before the Revolution, “The clothing of the country people was principally manufactured in our families and was generally of a coarse texture. The field laborer and the mechanic, sometimes wore his unbleached linen frock and the tanned sheep skin apron, and the low crowned wool hat and cowhide shoe was common." The contrast between this mode of dress and the elite of the town was striking: “Among the fashionable sort of people, the white linen shirt with flaunting ruffles at the wrists and bosom were seen; and when a pair of tight buff dressed doe skin breeches, with silver knee buckles, a pair of white stockings, sometimes of silk, and calf skin shoes with silver buckles and a beaver hat were added, the gentleman was complete, and excited the stare of the plain farmer.” (Epaphras Hoyt) While elite families gathered around the tea table in a ritual of refinement, Hoyt confirmed that before the war, “great plainness was seen at the table of the middling farm family or artisan. “Pewter dishes were generally used and spoons of the same metal . . . The beverage of beer or cider, at the table was served from the family mug, pewter or earthen, and all drank from one vessel.”

Those who lived through the early 1800s witnessed a new social and economic landscape. Old elites like the Ashley and Williams families lost ground to newly prosperous, ambitious neighbors. New manufacturing techniques and a rising standard of living transformed the way ordinary people set their tables and sat down to their meals. Shopping and furnishing homes took on new dimensions. Imported English ceramics replaced the old pewter plates and wooden trenchers, and individual glass tumblers displaced the sharing of the large tankard. More and more people began buying the sorts of goods that would have been considered luxuries out of reach only a decade or two before.

Partly in reaction, the wealthy redoubled their efforts to purchase more and better quality furniture, fabrics and table settings to signal their more elevated economic and social status. For the first time in modern history, ordinary people aspired to gentility through objects that embodied personal refinement and leisure at odds with the reality of their working lives. Although this emphasis on gentility seemed out of place with the republican, anti-monarchical spirit of the age, in fact it marked the democratizing of gentility. Now, anybody could aspire to be a "gentleman" or "gentlewoman" when formerly only a tiny minority could ever hope to attain that status.

Modern Americans can trace the national pastime of conspicuous consumption and display to their 19th century counterpart’s indefatigable pursuit of refinement. Increasingly numerous possessions modified behavior, fueling in the process social and economic ambitions. Advanced education and social polishing had been available only to the wealthy at specialized schools and colleges. Now, middling families could send their sons and daughters to academies where they gained a cosmopolitan view of the world in exchange for relatively modest fees. Even those who could not afford an academy term or two could attend public lyceums and lectures and join social libraries in a personal program of self-improvement.

Unanticipated opportunities enabled some to achieve a middle class status and lifestyle they could not have imagined. Few would have predicted that Dexter Marsh of Greenfield, a day laborer and church sexton would one day be able to earn substantial money excavating fossil footprints, open a museum and gain the respect of a larger circle of international correspondents and scholarly acquaintances. Like many members of the rising middle class, Dexter kept meticulous accounts of his purchases, self-consciously chronicling his social and economic mobility with every purchase—mahogany furniture, silver tea spoons, parlor mirrors, and prints and maps for the walls.

Changes in manners, habits and possessions heralded a transformation in American society in the early decades of the 19th century. Philo Munn’s diary entry reveals the personal anxiety that accompanied the pursuit and public performance of refinement. Not everyone succeeded in "knowing something and being somebody." The democratizing effects of more affordable consumer goods drove a wedge between the new middle class and the poor, who were increasingly marginalized when they were unable to participate in rituals of refinement. For men like Dexter Marsh and their families, the consumer revolution enabled them to exercise personal agency as they fashioned new social identities for a new century.