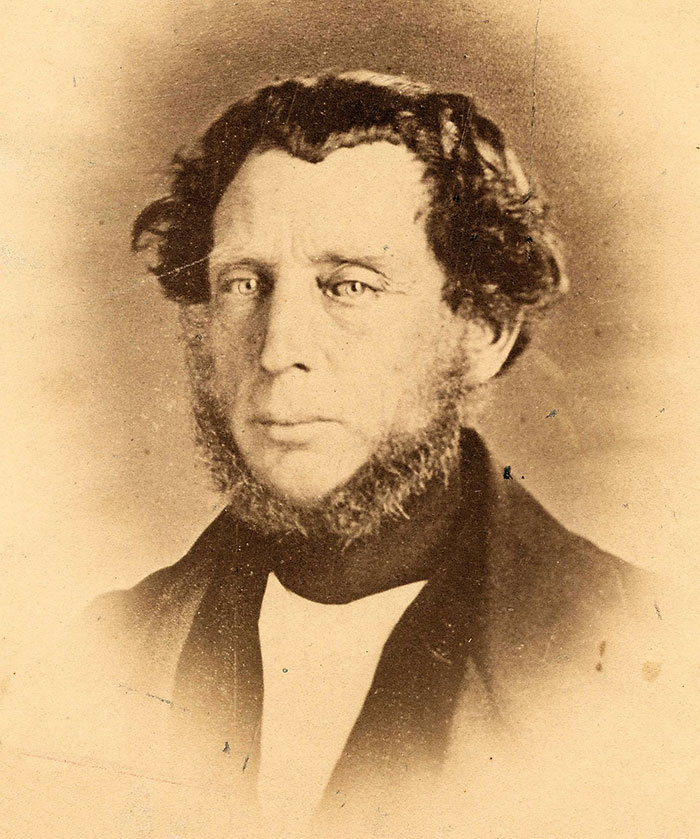 It is unlikely that the name of Dexter Marsh would be found in any but the most ordinary historical records—birth, death, perhaps church membership—had he not noticed fossil footprints in 1835. Yet even with all his accomplishments in paleontology, his name bobs up only briefly in accounts of the story of dinosaur footprints in all but the most local written histories. He probably would have disappeared entirely from notice had his younger son, George, not made sure his father would not be forgotten. More than 50 years after Dexter’s death, George donated a few items to the Pocumtuck Valley Memorial Association (PVMA), as recorded in PVMA's 1908 Proceedings. He also gave the museum written tributes to his father by prominent people who knew and admired him personally. He gave photographic images of his parents to the then-new Historical Society of Greenfield at the same time.

The contents of Dexter Marsh's estate are detailed in probate records at courthouse of Franklin County, Massachusetts, just around the corner from where his home used to be. His meticulous records of income and expenditures are held in the archives at Amherst College, unsentimental lists of day-to-day purchases and notations regarding work and a changing roster of boarders at his home. He rarely reveals emotion. Even his two marriages and the death of his first wife are only tersely acknowledged. He did not think it the place to record his discovery of fossil footprints, either, so the exact date is lost to history. Except for a few letters printed in journals, no known additional correspondence or diary remain.

He was born in Montague, Massachusetts, a rural town in the Connecticut River valley in the western part of the state. The seventh and youngest child of a poor family, he had little formal education and worked as a laborer all his life. His mother, Mindwell Crosby (or Crosbee) Marsh, died in May 1808, shortly before his second birthday. Young Dexter was not long without a mother, as his father married Abigail Clary less than nine months later. Dexter referred to her in his logbooks as "Mother Marsh."

Marsh ancestors were among the earliest colonists to settle Montague, so even if poor, the family was well established in town. Dexter developed habits of hard work as a child, doing household chores and devising ways to earn much-needed cash by such ingenuity as making rabbit traps to send to Boston, using hand-fashioned wooden pegs because he couldn't afford nails. Like other boys, he went to school in winters, but only after chores were done. His family could not afford to buy him schoolbooks. Fortunately, he had a curious mind and apparently boundless energy that drove him for all his too-short life.

In 1832, after a year or two in Deerfield, he moved to Greenfield, a neighboring town that had become the county seat in 1811. He worked as a messenger for the county courthouse, was custodian at town hall, and sexton at the Congregational church, ringing the bells for funerals and weddings. It was a compact little world. Courthouse, hall, and church were all across the street or virtually next door. In the evenings, he took on odd jobs at households around Greenfield, including those of its wealthiest and most prominent citizens.

He married Rebecca Slate from nearby Bernardston in April 1834, dutifully noted in his daybook as: "Was married to Rebecca paid expences &c. 5.50 Paid to Rebecca .50", between "plumb trees blown" and "Paid for 65 feet underpining stone 5.25" (all Dexter's original spellings). He built a simple two-story house on Clay Hill, now called Bank Row, in the heart of town. He noted in his logbook on May 15, 1834: “Raised house, the wether very cold, some snow & the mortices frose up with ice”. In August, Dexter and Rebecca moved in. Ever thrifty and keeping an eye on income, they rented out rooms to boarders for periods ranging from a few days to several weeks.

By November of the year of his marriage, he was buying “medicenes” and paying for unspecified medical services. Such unexplained notes appear sporadically in his logbooks, mentioning "Doc Dean" (his associate in fossil discoveries, who lived just around the corner) and several other doctors around town. Some of these dealings with doctors had to do with the births of their children, daughter Arabella on December 3, 1835, and son Frank on December 29, 1837, but it seems also that there was illness in the home. Since Dexter's logs show an unbroken record of work, it is likely that Rebecca was sickly. Sadly, she died on May 15, 1838, at age 27, leaving Dexter with a six-month-old infant and a toddler aged two and a half.

Until April 2016, Dexter’s logbooks for 1837-1839 were missing. Some researchers assumed that he was too preoccupied with taking care of his sick wife, and then mourning her, to keep records, but that notion was disproved when the book suddenly appeared at auction on E-Bay and was purchased by Pocumtuck Valley Memorial Association's library and archive. How it became separated from the other 12 volumes is a question that probably will never be answered. However, it reveals that Dexter’s habits remained unbroken throughout this period: he continued to work, buy quantities of milk, flour, molasses, and potatoes, buy clothing for the children, and in general pay for the business of living. He gave perfunctory notice that “Rebecca died” in the margin on one page and entered the funeral expenses on the next, but before, between, and after these notes, the minimalist record of his life went on as usual. There is no reason to think this was for lack of feeling. He could not afford to stop working and in any case regarded his logbooks as a place primarily used for financial records. He paid Dr. Deane more than $36 after Rebecca's death, nearly $1,000 in today's terms.

A year and a half later, he married Eunice Moselle Everett from just over the border in Halifax, Vermont. Dexter and Eunice had three children together: George Everett (December 4, 1840), Ella May (May 21, 1849), and Emogene Dexter (January 16, 1853), the youngest born barely more than two months before her father’s death. There is little record of Frank, Ella, and Emogene, but traces of Arabella and George have surfaced. Arabella was described as “Auntie Belle” in a deposition given to the Historical Society of Greenfield years after the Civil War. George attended Harvard University and became a mining engineer in Georgetown, Colorado, where he owned interests in silver mines and was a pillar of the community. The Harvard University archives have a set of his notes from geology lectures by Louis Agassiz, whom Dexter admired. George's son, also named George, graduated from the Massachusetts Institute of Technology in 1901 (geology) and the Armour Institute of Technology in 1909 (electrical engineering). Although the meager record makes Dexter appear unexpressive, he surely would have burst with pride, could he have known.

Dexter paid fees to the church for a pew, donated to missionaries, and subscribed to such publications as “The Christian Watchman” (published in Boston from 1819-1848) and “The Christian Cabinet (small book)”. The latter might have referred to a series of small volumes published in Edinburgh on Christian subjects, including such titles as “Watson’s Apologies for Christianity and the Bible,” “The Life, Walk, and Triumph of Faith,” “The Works of the Rev. W. Paley,” and John Bunyan’s “Pilgrim’s Progress.” Beginning in 1849, he sent butter and maple sugar to Constantinople, presumably to Christian missions for their use or sale. His interactions with missionaries seem mutually beneficial as much as pious: he received a “box” from Smyrna, probably containing minerals and most likely sent by a missionary with roots in Massachusetts. A missionary from Constantinople, William Goodell of the First Evangelical Armenian Church (but originally from Templeton, Massachusetts), signed the Visitors Book at Marsh’s“cabinet” during a visit home, as did Edwin Bliss, an Amherst College graduate (1837), and his wife, Isabella, from their mission in Turkey.

He made a powerful impression on well-educated and well-connected people who met him. James F. W. Johnston, a Scottish chemist and co-founder of the British Association for the Advancement of Science, visited Dexter’s museum in the company of the American geologist Henry Darwin Rogers, who had moved to Scotland. In recounting his trip, Johnston said: “In looking at this collection made by a working man, dug up either with his own hands, or by men working along with him—at his expense, under his direction, and in spots which his own sagacity indicated as likely to reward research—I could not refrain from admiring the enthusiasm and perseverance of their owner, and regretting that, even in this intellectual State, science was too poor, not only to engage such a man wholly in its service, and to add to its treasures by employing him unremittingly in his favorite pursuit, but that it was unable even to purchase the fruits of his past labours, and add them to public collections already accumulated in so many localities. Should American patrons of science, and the owners of University and State collections continue unwilling to purchase the large slabs of Mr. Marsh, those of European countries—I hope of Great Britain—may secure the best he possesses for a little more than a thousand dollars, or two hundred pounds.”

Lorenzo Langstroth, known to beekeepers today for his innovations in hive design, wrote, “Had his health continued good, even with all the disabilities under which he labored, he would have made himself recognized as one of the great thinkers in the line of investigation to which he devoted himself. . . I have scarcely known one of more native force as a rare observer and an able reasoner on the results of his own observations and those of others.”

Oliver Marcy, who taught at Northwestern University and established its natural history museum, praised Marsh for his work ethic and religiosity, but was more impressed with his intelligence. He gave the best description we have of Marsh’s home and then, in an oblique reference to the controversy over priority between Edward Hitchcock and James Deane, said: “Mr. Marsh had no reputation to lose . . . yet much praise is due to him that, in his circumstances, he comprehended the nature and importance of the discovery, and acted with a zeal in reference to it, which not one in a million would have shown.”