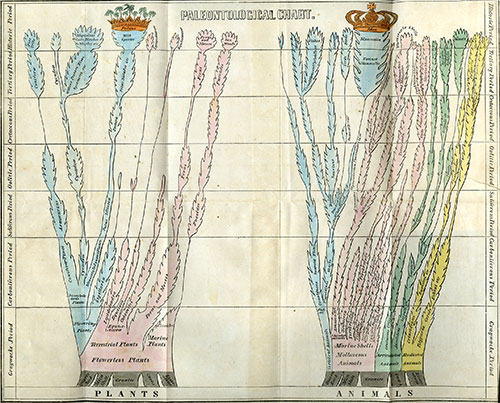 Orra Hitchcock drew this chart to express her husband's ideas about the connections among various life forms, with plants on the left and animals on the right. These are not genetic relationships, but his observations of shared characteristics. Image courtesy of Pocumtuck Valley Memorial Association Library.

Botanists and zoologists create taxonomies to categorize plants and animals based on shared characteristics. Creating a taxonomy requires deciding which specific characteristics are the most important. In botany, it includes the root system, the shape of the leaves, the number of stamens, the color and arrangement of petals, overall size, and so on. The French anatomist Baron Georges Cuvier created a taxonomy for animals that took into account skeletal anatomy, teeth, feet and hands (“manus”), talons or lack of them, etc. Animals with similar anatomies are today considered to be related to one another, descended from a common ancestor, possibly quite far back in time.

While geology also has categories, these are not considered taxonomies because rocks of the same type—two types of granite, say—do not share a common ancestor, but were formed at different times in different places by similar processes. Rocks are grouped according to how they are formed: igneous (heat), sedimentary (eroded and recompacted rock granules), and metamorphic (any kind of rock that has been partially melted and re-hardened, which changes the characteristics of the rock according to mineral content and degree and duration of heat).

When Europeans began to explore the North American continent and other regions of the globe for trade and colonization, they were astounded by the abundance of plants and animals they had never seen before. The collection and categorization of natural objects, a vital part of science since Aristotle, assumed even greater importance as naturalists struggled to make sense of the novel specimens of plants, animals, fossils, shells, and minerals that flooded into the metropolitan centers of science. The American colonies were still raw and new compared with Europe, and lacked the Old World’s vast libraries, universities, and museums, but in compensation, this New World provided fields for collecting. The chance to go to often remote, even dangerous areas appealed to adventurous young men such as William Bartram, who famously was attacked by an alligator when fishing for dinner while on a collecting tour.

Drawing of plant specimens became necessary in this enterprise. Many field botanists became skilled at close observation and depiction of plant species, and adept at knowing which parts of a plant to emphasize; for example, if the number of stamens was crucial to a plant’s identification in the Linnaean system, then these would be carefully drawn so they could be counted. This skill could be crucial, as it was not uncommon for plants to suffer injury during transport. In contrast, animal bodies could be pickled in barrels of alcohol for safer shipping.

With all the new life forms—from not only the Americas but also explorations in Africa and Asia—came new problems in classification. Ancient Greeks knew of about 600 species of plants. By the mid-15th century, on the cusp of world exploration, Europeans knew of a few hundred more than that, but 300 years later a combination of exploration and the Enlightenment interest in the rational study of nature brought this number to 7,000-10,000. The range is partly explained by different methods of taxonomy, which determined which features counted and whether the observer was a “lumper” or a “splitter,” that is, someone prone to lump together some features into one species versus someone who split a creature off into a new species because of sometimes subtle differences. In the mid-1700s, the Swedish botanist known as Linnaeus devised a simple, effective system for bringing plant and animal life into order, but his system was overwhelmed by the tsunami of new material. In addition, 18th- and 19th-century field botanists could not haul heavy reference books on their treks into the wilds, which resulted in a species being identified and named by numerous collectors, each of whom might use a slightly different criteria. Between 1820 and 1845, twenty or more taxonomical schemes vied for prominence.

Edward Hitchcock noted problems with taxonomy in his 1841 Final Report on the Geology of Massachusetts, which touched lightly upon the state’s botanical and animal resources. Around this time, Hitchcock devised what is thought to be the first "Tree of Life," drawn by Orra White Hitchcock, and published in his Elementary Geology through numerous editions. The figure was finally deleted from editions from 1860 and onward, because Hitchcock was leery of being associated with Charles Darwin's notions of evolution through descent, published in 1859, in On the Origin of Species. What Hitchcock had intended to show was not that species evolve, but that God uses certain motifs in His designs of specific animal structures.