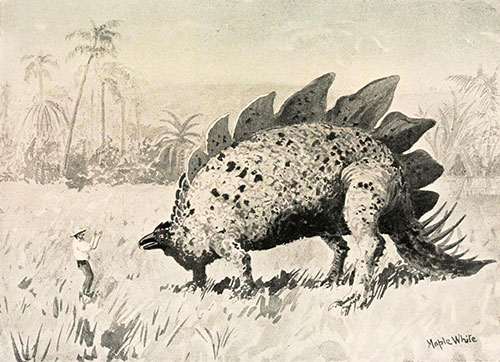 Surprisingly, there are direct connections between Edward Hitchcock’s “fossil bird tracks” and Sir Arthur Conan Doyle, the creator of Sherlock Holmes, and popular culture. In 1912, Doyle published a book called The Lost World. The story takes place on a vast mesa deep in the jungle of South America, about as exotic a setting as an Irish Scottish Englishman such as Doyle could imagine, so distant in space, time, and familiarity that it could somehow seem feasible to him—and his readers—that dinosaurs could still live there, beyond the reach of the modern world. Doyle based the site on the reports of a friend, Percy Fawcett, who had gone on expeditions to Bolivia and reported that the region had “monstrous tracks of unknown origin,” which sounds similar to some of the “bird tracks” (therapod dinosaur footprints) in the sandstone of western Massachusetts.

In 1925, the first of several movies based on Doyle’s story was made by two brothers, Arthur and Harry Hoyt, who were cousins of Edward Hitchcock, three generations down the line. Their great-grandfather was Epaphras Hoyt (“Uncle Ep”), who had a son named Arthur. One of the last acts of Edward Hitchcock’s life was to inscribe a copy of his major work on the footprints, Ichnology of New England, to cousin Arthur. Arthur’s son Charles sought his fortune in the raw, new town of Georgetown, Colorado, in 1870, where he worked as a surveyor and mining engineer. (In a surprising coincidence, Dexter Marsh’s son George also settled there a few years later to work in exactly the same field.)

Georgetown was barely scraping out its place in the wild Rocky Mountains and Colorado wasn’t yet a state. It is only 35 miles into the mountains from Morrison, Colorado, where fossilized dinosaur skeletons were discovered in 1877, setting off the now famous “Bone Wars” between Othniel Charles Marsh and Edward Drinker Cope. The next Arthur Hoyt was born in Georgetown in 1874, and brother Harry was born in Minneapolis in 1885. They would have been aware of these discoveries as children, and might have paged through their grandfather’s copy of Hitchcock’s book. Perhaps they thought of Cousin Edward’s description of huge birds and wondered how they related to the skeletons, and at night dreamed of strange worlds teeming with gigantic, terrifying reptilian beasts.

Harry was the director of the 1925 version of The Lost World, with Arthur playing the role of Professor Summerlee, a scientist. It starred Wallace Beery as Professor Challenger and Bessie Love as Paula White, the love interest of Edward Malone, played by Lloyd Hughes. Directorial credit is generally given to Harry Hoyt and Willis O’Brien. It appears that Hoyt was the director and O’Brien was responsible for the special effects, which he further developed a few years later in King Kong.

Harry Hoyt made a few more movies, but Arthur developed a significant Hollywood career, starting in silents and surviving the change to talkies. He made over 275 movies and worked regularly with some of the biggest Hollywood names: directors Preston Sturges and Frank Capra, actors Henry Fonda, Spencer Tracy, William Demarest, Clark Gable, Barbara Stanwyck, Eddie Bracken, Charles Coburn, Joel McCrae, Claudette Colbert, Mary Astor, Rudy Vallee, even early Gloria Swanson, Fanny Brice, Rudolph Valentino, and more. It is curious to imagine such a life for a great-grandson of General Epaphras Hoyt, military historian, major-general in the Massachusetts militia, staunch citizen and proud descendant of the Puritan founders of Deerfield, Massachusetts.