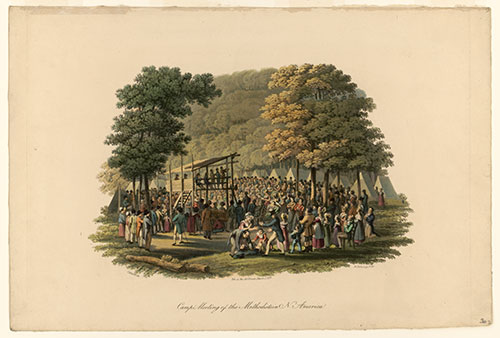 "Camp Meeting of the Methodists in N. America," M. Dubourg. Image courtesy of Library of Congress Prints and Photographs Division.

The Great Awakening was a religious revival movement of the 1730's and ’40's that took Protestant churches in Europe and Britain’s North American colonies by storm.

Early Puritan churches in New England had not suffered for want of members. The same could not be said by the early 1730's. By then, New England’s religious "errand into the wilderness" was a century old. Church membership had dwindled when the children and grandchildren of the original founders did not attain the same level of spiritual intensity necessary for a religious conversion experience. A general malaise seemed to be afflicting New England’s churches and their energetic Utopian beginnings seemed far away and irretrievable.

The religious revival for which clergy and anxious parishioners had hoped and prayed ushered in a "Great Awakening." Thousands were swept up in the emotional whirlwind it created. Men and women flocked to hear preachers like Jonathan Edwards condemn their lack of faith and warn them of the eternal punishments that awaited damned souls outside of God’s redeeming grace. His love and the rewards of redemption figured as prominently as hellfire in Great Awakening sermons, and those who came through this personal spiritual struggle with a conversion experienced an overwhelming sense of joy mingled with intense relief.

At first, ministers and congregations throughout New England rejoiced as new members revitalized declining parishes. Disillusionment among many established clergy and colony leaders quickly set in, however, as the Awakening began to run far beyond the boundaries they found acceptable. Of particular concern were assaults on the authority of church leaders and the exodus of Baptists and other break-away Calvinist sects to found their own churches. A later recollection of these events noted the less-privileged status of early New England Baptists, “generally called Separates…[who] possessed little or nothing of the respect and intelligence of the present clergy of the sect.” The Reverend Joseph Fish of North Stonington, Connecticut, joined the fray when he preached that the “‘Standing Churches’ in New England, are built upon the Rock, and upon the same principles with the first fathers of this country: and that separates and Baptists are joining with the Gates of Hell against them.” When Fish refused to allow an itinerant preacher access to his pulpit, the women in his congregation protested by sitting in the aisles with their knitting, and interrupting his sermon.

Joseph Fish’s struggle to retain control of his pulpit (and his dignity) highlights a central figure of the First Great Awakening: the itinerant preacher. The zeal and message of these itinerants resonated with many non-elites anxious about their spiritual state and fate. Generally less educated than the clergy whose pulpits they borrowed (and, at times, commandeered), the anti-intellectual bent of many itinerants appealed to those who felt their ordained ministers, no matter how erudite, to be spiritually “dead” and uninspiring.

James Davenport was one of the most inflammatory Great Awakening itinerant preachers. He claimed he could tell whether a person was saved or not, a direct assault on the Puritan belief that only God knew the ultimate fate of an individual’s soul. The Connecticut Assembly declared Davenport mentally unhinged, exhibiting  "enthusiastical impressions and impulses, and thereby disturbed in the rational faculties of his mind." Davenport nevertheless continued to preach, railing against worldly temptations and holding public gatherings where he urged people to burn books, costly clothing and other possessions. (By 1744, Davenport had publicly apologized for these actions and claimed he had been under the influence of a “demonic spirit.” He left Connecticut for a parish in New Jersey, where he died in 1757.)

The most famous of all Great Awakening itinerant preachers was George Whitefield, an Anglican minister who had a hugely successful tour of the North American colonies. Whitefield attracted thousands with his message of spiritual redemption and the need to reject the stale rituals that defined business as usual in their churches. It is hard to underestimate the power of Whitefield’s message. A man who traveled to Middletown, Connecticut, with his wife to hear Whitefield vividly described the excitement and drama of this experience:

"The land and banks over the river looked black with people and horses; all along the 12 miles I saw no man at work in his field, but all seemed to be gone. When I saw Mr. Whitefield come upon the scaffold, he looked almost angelical; a young, slim, slender youth, before some thousands of people with a bold undaunted countenance. And my hearing how God was with him everywhere as he came along, it solemnized my mind and put me into a trembling fear before he began to preach; for he looked as if he was clothed with authority from the Great God, and a sweet solemn solemnity sat upon his brow, and my hearing him preach gave me a heart wound. By God’s blessing, my old foundation was broken up, and I saw that my righteousness would not save me."

As concern over the effects of the Awakening spread, ministers in the mid-Connecticut River Valley of Massachusetts banded together to bar itinerants from their pulpits. This region was already known for their moderate stance on church membership and opposition to overly emotional displays of religious “enthusiasm." Their leader, the Reverend Solomon Stoddard, was an extremely influential minister who led the church in Northampton, Massachusetts, for over 60 years; some of his detractors referred to him as "Pope" of the Connecticut Valley. A Deerfield resident confirmed in a town history that local clergy were not eager to allow the “itinerant disorders”of the Great Awakening. He recalled that “the ravings of Whitefield” had not advanced up the valley past Northampton, “where the people were known to have been very susceptible of enthusiastic awakenings—probably from the bewitching metaphysics of Dr. Edwards.” Jonathan Edwards was a well-known preacher and amateur scientist. Best remembered for a riveting sermon preached in Enfield, Connecticut, “Sinners in the Hands of an Angry God,” Edwards got off to a strong start when he was hired in 1730, to lead the Northampton church. Despite his Yale education, being Stoddard’s grandson and handpicked successor, Jonathan Edwards’ Great Awakening Calvinism ultimately alienated influential members of his parish and he lost his post.

The Great Awakening in New England began to lose momentum in the later 1740's. Exhausted clergy and congregations struggled in its wake to repair divided communities and restore unity in their churches. The long-term effects of the Great Awakening persisted, however. The call to action by itinerant preachers for congregations to speak up and against established elites and gain control over their churches laid bare the potential for resistance among ordinary people to colonial and Crown authority. In 1775, a group of Revolutionary officers broke into Reverend Whitefield’s Boston tomb to gather scraps of his clerical bands to inspire them in their expedition to Canada and assault on the fortified city of Quebec.

In the decades following the Revolution, another religious revival would sweep the new nation. In this “Second Great Awakening,” itinerant ministers would again rouse and channel the spiritual energies of millions of American men and women. In contrast to its predecessor, this new awakening offered an optimistic vision of salvation within the grasp of all who reached for it.