The Religion of Geology 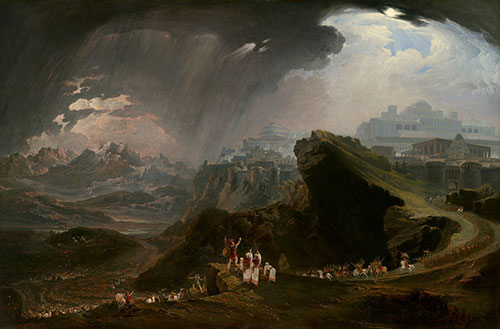 "Joshua Commanding the Sun to Stand Still upon Gibeon," John Martin. The English artist often painted highly expressive scenes of a landscape that showed an acute awareness of geology. Image courtesy of National Gallery of Art.

Long before Edward Hitchcock's day, theologians had wrestled with the question of how the Earth was created and sought to reconcile objections to the factual history of the flood described in the Book of Genesis in the Christian Bible. (It was often called the "Noachian Flood", in reference to Noah, the builder of the ark, who stayed on the ark until the flood had subsided.) Many people feared that once the Flood was abandoned as a major force in shaping the landscape, the authority of Genesis would be undermined.

In 1696, the English theologian Thomas Burnet (1635-1715) published The Sacred Theory of the Earth. He believed that the Flood must have been universal, that it covered the whole globe. Otherwise, wicked people could have escaped God’s wrath by simply moving away. In addition, European and British travelers to other parts of the world had brought back the knowledge that flood myths exist everywhere. Burnet solved the quandary of where so much water might have originated by reasoning that if the Earth had been smooth and mountainless, not so much was needed to cover it.

Another English theologian, Erasmus Warren (d. 1718), agreed that the flood was universal, but thought that mountains had indeed existed before the flood and stuck up above the water. Naturalist and theologian John Ray (1627-1705) wondered about the Americas. If they were not inhabited at the time of Noah, there was no need for a flood to reach that far. Thus, the flood could have been local.

In A New Theory of the Earth, published in 1696, William Whiston (1667-1752) proposed that a comet had passed by the Earth, which at that time was perfectly round and had a perfectly circular orbit around the sun, and therefore no seasons. The comet caused tidal waves to flood the land and left its melted water behind to add to the water already released from a deep abyss. Whiston determined that the Earth was “covered to an average depth of 10,821 feet,” which would have covered any mountain known to him.

Edward Hitchcock considered some of these and other questions of Earth's history and processes when he wrote The Religion of Geology, published in Boston in 1852.

In his preface, Hitchcock described the three factors he saw as necessary to reconcile religion and geology: knowledge of geology, zoology, botany, and comparative anatomy; training in Scriptural interpretation; and understanding of the principles of natural and revealed religion. Hitchcock was upset by his co-religionists who knew nothing of geology but attacked it in the name of defending Christianity. He championed the cause of more and better teaching of the sciences in the seminary, so that future ministers could both accept the science and at the same time effectively refute scientific slanders against theology. This was a sacred mission for Hitchcock.

Lecture IV in The Religion of Geology begins with the assertion that most “well-informed geologists” believed that the Flood had left no geological evidence currently distinguishable on the landscape, and that the Bible does not allude to any “permanent marks of such a catastrophe within or upon the earth.”

His arguments were that "drift" (unsorted rock rubble of the type that would be left by a flood) contains no fossils and no human remains, which would be expected in flood deposits. There was also too much drift material in existence for the Flood to have carried and deposited in the year allowed in Genesis (40 days of rain, 150 of ebbing, and more time drying, to a total of about 380 days).

Second, fossils were not scattered randomly, as if left by a flood, but were ordered like “the specimens in a well-regulated cabinet.” No modern species were found, and how could Genesis account for the extinct tropical “races” of plants and animals that look more similar to modern forms toward the top of the strata?

Third, “there are no facts in geology that afford any presumption against the Noachian deluge, but rather the contrary. . . . The geologist says only, that if any traces of it exist, he cannot distinguish them from the effects of other analogous agencies that have operated on the globe at various periods.”

Fourth, “there are reasons, both in natural history and in the Scriptures, for supposing that the deluge may not have been universal over the globe, but only over the region inhabited by man.” The problem of where the water came from could be easily circumvented, he suggested, simply by limiting the Flood to the known biblical world, which would require much less water.

Hitchcock knew of calculations that claimed to prove that one pair of all animal species could have fit on the ark. This assumption acknowledged only 300 to 400 species, however, and 19th century zoologists knew of at least 150,000 on the planet. However, if dealing with only the plants and animals of a particular region, he considered 300 to 400 species to be a reasonable estimate.

Another argument against the universality of the Flood was that 19th century zoologists and botanists had discovered that there were “several centers of creation, from which  the animals and plants radiated only so far as the climate and food were adapted to their natures, except a few species endowed with the power of accommodating themselves to all climates.” Science had learned about species niches, that is, that species vary from place to place and are “custom fitted” to live in a particular ecological niche in a particular geographical region. How could “animals of the torrid zone of the present day” have gotten to the ark without dying of cold, heat or starvation? And after the Flood, how would they make their ways back to their ideal habitats in their own corner of the globe without dying?

On top of these arguments is a strictly theological one. The Flood was meant to punish mankind, but to save Noah and his family and the plants and animals. Hitchcock and others believed that most of the Earth had been only recently populated. “Why, then, for the sake of destroying man, occupying probably only a limited portion of one continent,” Hitchcock reasoned, “was it necessary to depopulate all other continents and islands, inhabited only by irresponsible animals, who had not connection with man?”

Hitchcock acknowledged that biblical language seems to imply the universality of the Flood: "all the high hills that were under the whole heaven were covered, and every thing that is in the earth shall die." But these are problems of 19th century interpretations of pre-Christian man, he pointed out. Ancient man did not know how big the world was, and God spoke to their own experiences. “All,” in common usage could mean “many”: "All countries came into Egypt to Joseph to buy corn, because famine was sore in all lands". This must have meant only the countries around Egypt, not literally every one. "This day will I begin to put the fear of thee and the dread of thee upon the face of the nations under all the heavens": Hitchcock explained that God was speaking to the Israelites and meant “only the nations contiguous to the Israelites, chiefly the Canaanites”.

By the time The Religion of Geology was published in 1852, these questions had long been settled among geologists, including those who were Scripturally committed, but Hitchcock knew that some of his Christian brethren were not yet convinced.