Picturesque Aesthetic Theory and the Sublime 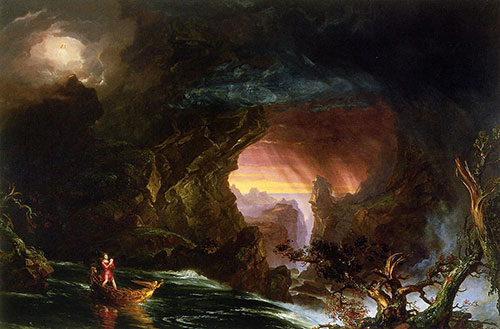 The aesthetic theory of the "picturesque", the "beautiful", and the "sublime" was developed in England in the 18th century and later adopted by Americans. The categories were central to ideas of landscape and garden design and soon were widely applied to painting, poetry, literature, music, and even tourism and cemetery design, any aesthetic experience with an emphasis on evoking emotion. These ideals were important in American and British arts until the middle of the 19th century.

The "beautiful" was serenely balanced, pleasing, smooth, and soothing. A beautiful landscape might use broad, open areas, winding lanes, and symmetrical plantings, elements generally associated with Classicism (the literature and art of ancient Greece and Rome). The "picturesque" was a little wilder, more irregular, asymmetrical, meant to intrigue rather than soothe, and sometimes has been associated with Medieval ideals. In the "sublime", vast horizons, towering mountains, and plunging chasms inspired profound feelings of awe, or even fear, rapture, and closeness to God or the infinite.

The idealization of nature's landscapes promoted a spiritual antidote to the crowded, industrialized urban areas where so many people lived. Geology and the weird and fascinating discoveries of paleontology gave fertile ground to the sublime imagination. A Scottish academic, the Reverend Archibald Alison (1757-1839), lived in Edinburgh during the years when it was a hotbed of geological study and clashing theorizing. The city itself and its surrounding countryside clearly display the underlying geology. The Reverend remarked in his Essays on the Nature and Principles of Taste (1790), “Nothing is more sublime than the form of rocks, which seem to be coeval with creation, and which all the convulsions of nature have not been able to destroy.” The study of geology would induce thoughts of God and eternity. With paleontology showing the world not merely fossilized shells and plants, but skeletons and skulls of enormous extinct animals, the terrors of imaginary monsters suddenly seemed more real. Paleontological discoveries induced the pleasurable thrill that some people today experience from watching horror movies.

Even geological writing and illustration were imbued with this aesthetic. The English geologist Charles Lyell wanted to be a poet as a young man and while attending Oxford University, submitted annually—and unsuccessfully—for the school’s poetry prize. He found his metier in geological writing, where his clarity and sometimes lyricism were intended to convince his audience to view the Earth in a new way. Other geological writers, such as Gideon Mantell and Hugh Miller, also aimed to stir the emotions. Even drawings of geological cross-sections shared in the aesthetic, often showing a picturesque or sublime landscape over-top the layers of earth below. Orra Hitchcock and other artists depicted numerous picturesque views across the state of Massachusetts for Edward Hitchcock’s state surveys, and many geologists included such views in their works for popular audiences.

Tourism in Britain and the United States took on a religious hue in the early 1800's, shading over into a more emotional and psychological idea of personal journeying in the later decades. Artists produced landscapes of all varieties for travel guides, hoping to entice potential travelers with the promise of an emotional and spiritual experience. Edward Hitchcock’s geological writing and Orra's landscapes helped the Connecticut River Valley become a tourist destination. The Mount Holyoke Range became a highlight of the "grand tour" in the 1820's, for its picturesque views of the countryside with its scattered towns and small farms. Timothy Dwight, Yale College's president from 1795-1817, believed such views were perfection: wild nature tamed and tidied by human hands. Instead of inspiring feelings of humans’ near-insignificance, as in the sublime aesthetic, the picturesque view showed the charming, comfortable results of following the Biblical imperative to subdue the Earth.

Some writers have seen Calvinism as incompatible with the ideals of the sublime, because of the sublime's association with Romanticism, with its indulgence in emotion and appeal to the irrational, as opposed to the cut-and-dried Calvinist beliefs in predestination and a narrow pathway to God. However, similar to Reverend Alison, the deeply Calvinist Edward Hitchcock was well aware of this aesthetic theory and he reveled in the sublime. Even his official reports as official State Geologist of Massachusetts veered from factual reporting into rhapsodizing over the beauties of his home state. When he and Orra traveled in Britain, much of the landscape reminded them of home, but the the overwhelming views of the Swiss Alps moved them to ecstasy. Each of them noted experiencing religious feelings that touched on human tininess in God’s grand design.