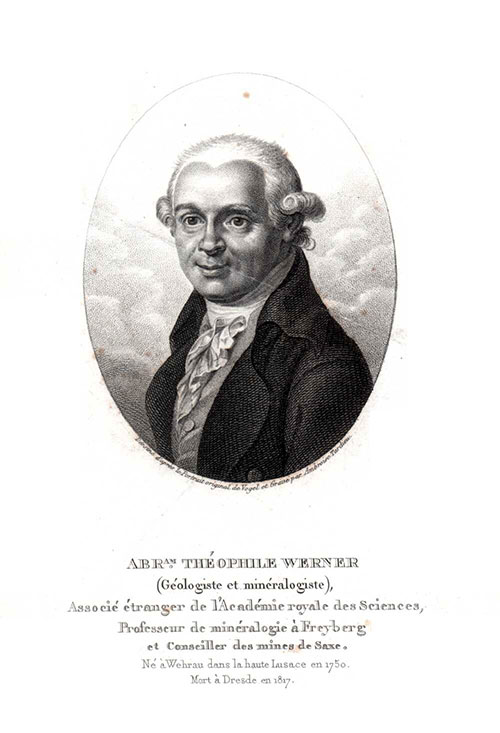 The great German geologist Abraham Werner, whose brilliant theories of rock formation were eventually shown to be only partially right. Image courtesy of Wikimedia Commons.

In the search for understanding how geological features had been formed, there was controversy over whether the primary agent of geological change was the action of water or heat. The so-called "neptunist" (for water) versus "vulcanist" (for heat) debate arose in the late 1790s and had essentially subsided by 1820. The names came from the Roman gods of the ocean (Neptune) and of fire (Vulcan).

Abraham Gottlob Werner (1749-1817), professor at the mining academy in Frieberg, Germany, led the neptunists. In 1777, he published Kurze Klassification and Beschreibung der verschiedenen Gebirgsarten (Brief Classification and Description of Different Rock Formations), in which he put forth the idea that the Earth was originally covered by an ocean, out of which granules of matter precipitated to form rock. The first deposits were the oldest, unstratified crystalline granites, gneisses, and schists, which he called the Primitive layer. Next were Transitional layers of chemical and mechanical deposits, many of which held fossils, followed by alluvial deposits (the remains of receding water) in the lowlands, the broken and worn erosion from earlier rock. Even basalt, he believed, was formed this way and was not a product of lava. After all this matter hardened into rock layers, the primal ocean receded with tremendous power, cutting mountains and valleys and scattering large boulders. As the water level dropped, it became quieter, leaving behind less-roiled sediments to form the gentler contours of the lowlands. Only after the water had drained away was it possible for volcanic rocks to be formed. Werner thought that lava was heated by underground fires in layers of coal, and that lithified lava (meaning that it was formed into rock by pressure) could be found only in regions of currently visible volcanic activity.

This theory had some convincing evidence. The Alps have a granite (crystalline) core covered by layers of sediment and chemical precipitates such as limestone, and alluvial deposits at the base. However, the Italian geologist Scipio Breislak (1748-1826) pointed out that there wasn’t enough water on the whole planet to hold so much material in suspension. Where had all the extra water come from and where had it gone?

Breislak was more familiar with mountains than Werner was. He thought that instead of the ocean receding, the land had been raised up by heat. He was sure that basalt did not precipitate out of water, but that it was volcanic, because he could see the results around him. Basalt is found in lava flows of volcanic mountains, in areas of former volcanic activity, and at the ridges of the ocean seafloor where magma leaks through and cools.

The English used the term "plutonism" (named for Pluto, the Roman god of the underworld) to describe similar ideas. The Edinburgh geologist James Hutton (1726-1797) believed that heat from beneath the Earth’s surface was basic to the formation of some kinds of rock, although he recognized the role of water in erosion and the deposition of sediments. Volcanoes were a kind of safety valve, with heat expansion uplifting the surrounding land and layering it with lava, which then cooled and became basalt, granite, andesite, or other volcanic rock. These would eventually erode and their detritus would make its way to the ocean floor, where the sediments solidified into rock again from heat and pressure. In a slow cycle over great swathes of time, the expansion of underground heat would raise up the seabed—which explained why fossil shells are found on mountains—and the cycle would repeat. Hutton also understood that molten material pushed its way into cracks and crevices, creating veins in the surrounding, older rock. Seeing granite veins in mica schist proved to him that the granite was younger than the schist, because the liquid lava must have forced its way in before cooling and hardening, which directly contradicted Werner’s belief that granite was always the oldest rock.

By 1820, while Edward Hitchcock was studying theology at Yale, neptunism was no longer taught in the universities and mining academies of Europe. It had not been refuted in a decisive battle, but Werner’s ideas were made simply irrelevant by the gradual (and regretful) defection of his most distinguished students to the conviction that heat had played the most important role in the formation of rock. Even after the theory had been abandoned, though, the concepts were so familiar that they might be used in discussions. In a letter to Edward Hitchcock, dated November 19, 1830, Benjamin Silliman commented, "I supposed the granite veins will be my affair to pay for. Before you finish that article you should visit . . .  Canton (Connt.) . . . where there are the most astonishing granite veins that I have ever seen baffling Neptune & Vulcan both to produce."