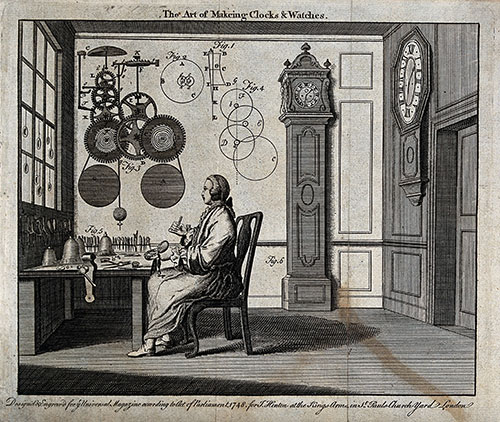 Natural Theology was an important school of thought during the 19th century. The term refers to the belief that God can be approached through observation of the natural world and the use of reason, rather than exclusively through faith in revealed religion.

Its classic statement was by the English Reverend William Paley, whose 1802 book was used at universities and colleges in Britain and the United States. Paley thought that the beauty and order of the world were proof that there was a single Designer behind all of life. It was Paley who used the image of the so-called "Watchmaker God". If we look at a watch,

we perceive . . . that its several parts are framed and put together for a purpose, e.g. that they are so formed and adjusted as to produce motion, and that motion so regulated as to point out the hour of the day; that if the different parts had been differently shaped from what they are, or placed after any other manner or in any other order than that in which they are placed, either no motion at all would have been carried on in the machine, or none which would have answered the use that is now served by it. . . . the inference we think is inevitable, that the watch must have had a maker – that there must have existed, at some time and at some place or other, an artificer or artificers who formed it for the purpose which we find it actually to answer, who comprehended its construction and designed its use.

Therefore, according to Paley, only an Intelligent Designer could have created the world of plants, animals, and people. Charles Darwin studied Paley’s book while a student at Cambridge University, as did students at Oxford, Edinburgh, Yale, and Amherst College. While Darwin was impressed with the argument, he was also troubled by it: Why would a loving God allow so much waste, pain, and cruelty in His designs? Why did so many young animals die, with only the stronger siblings surviving? Why were there so many seeds that never came to fruition?

The idea of Intelligent Design has come back into public discourse in the United States today, particularly in the context of public education.