The Raven, the Ark, and Flood Geology 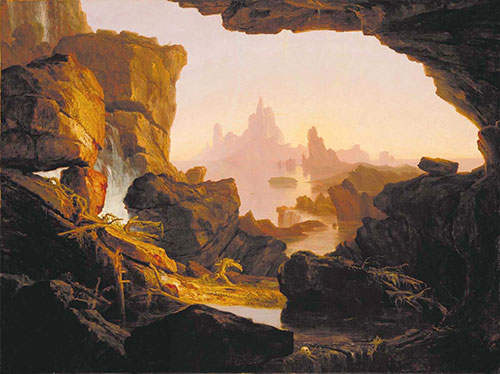 "The Subsiding of the Waters of the Deluge," Thomas Cole, 1829. Image courtesy of Smithsonian American Art Museum.

The story of Noah’s raven is part of the larger account of a great flood in Genesis, the first book of the Jewish Pentateuch and the Old Testament of the Christian Bible. According to Genesis, the Earth in ancient times had become so corrupt that God decided to destroy all life through a cataclysmic flood, choosing to save only one righteous man named Noah, his immediate family, and the creatures placed under his protection. In the Genesis account God directed Noah to build an enormous ship, or ark, to hold his family and representatives of all other living creatures of the earth.

Once Noah’s ark was completed, the skies opened and rain fell for forty days and nights until the entire earth was covered with water and no living thing survived except those within the safety of the ark. When the skies cleared and another forty days had passed, Noah released a raven. Noah’s raven “went forth to and fro, until the waters were dried up from off the earth.” Only when a dove Noah sent out after the raven no longer returned did Noah decide it was time to leave the ark and the mountain top upon which it rested.

At a time when most New Englanders were biblically literate, Dr. Elihu Dwight's South Hadley neighbors understood the doctor's meaning when he whimsically referred to the mysterious fossilized markings in the slab he had purchased from the Moody family as footprints from “Noah’s Raven.” They knew from the Genesis story that, unlike the dove, the raven never returned to the ark; a carrion eater, "Noah's Raven" would have fed upon dead, decaying animals exposed as the flood waters receded. In contrast, the dove Noah released after the raven did not abandon the ark until life returned to the Earth, symbolized by the live olive branch it carried to Noah before flying away for good, a welcome sign that it was possible to leave the ark.

The Moodys and Dr. Dwight realized that the markings on the slab young Pliny had plowed up were ancient, but how old were they compared to the age of the Earth? Scientists and Christian theologians had long been interested in determining just how old the Earth was. As an educated man, Dr. Dwight would have been aware that biblical scholars and Enlightenment scientists, including Johannes Kepler and Sir Isaac Newton, dated the Earth’s beginnings to about 4,000 years before the birth of Christ. The most well-known of these chronologies was created by James Ussher. An archbishop of Armagh, Ireland, during the seventeenth century, Ussher used available sources, including the Bible, to painstakingly calculate that the Earth was created on October 23 at 6:00 p.m. in 4,004 BC. Annotated editions of the King James Bible, preferred by millions of Protestant Christians well into the nineteenth century, routinely included Ussher’s chronology.

In the 1800s, scholars and researchers began to question Bishop Ussher’s chronology, although early geologists like William Buckland and Robert Jameson continued to weave biblical interpretations into their theories of an ancient Earth altered through periodic extinction catastrophes such as the flood chronicled in Genesis. Other researchers offered an alternative explanation. Rather than emphasizing catastrophic events like a great flood to explain how modern-day geological features came to be, they instead approached geological evidence with the assumption that the laws of nature were uniform and unchanging. Sometimes called uniformitarians, scientists like James Hutton and Charles Lyell argued that present-day landscapes provided evidence of natural processes taking place gradually over tens of millions of years.

Both catastrophist and gradualist theories challenged popular widespread religious and cultural assumptions that humans were present on the Earth from the very beginning. Learned ministers like Edward Hitchcock and others had to decide how and if they could reconcile exciting new theories of the Earth’s geological history and age with deeply held theological beliefs. Disputes over the age and nature of the bird-like tracks in ancient stones up and down the Connecticut River Valley as well as in Britain and continental Europe would play a critical role in these on-going and often contentious debates.

Meanwhile, religious beliefs and accompanying assumptions about the the flood continued to permeate popular culture. The popular American landscape paintings of the artist Thomas Cole reflected a general interest in the flood and its aftermath. Cole often incorporated biblical narratives in his work and found the flood story especially compelling. He frequently included dramatic geological features such as huge balancing rocks and hanging boulders perched on mountain sides, interpreting them as undeniable evidence of this cataclysmic ancient event.