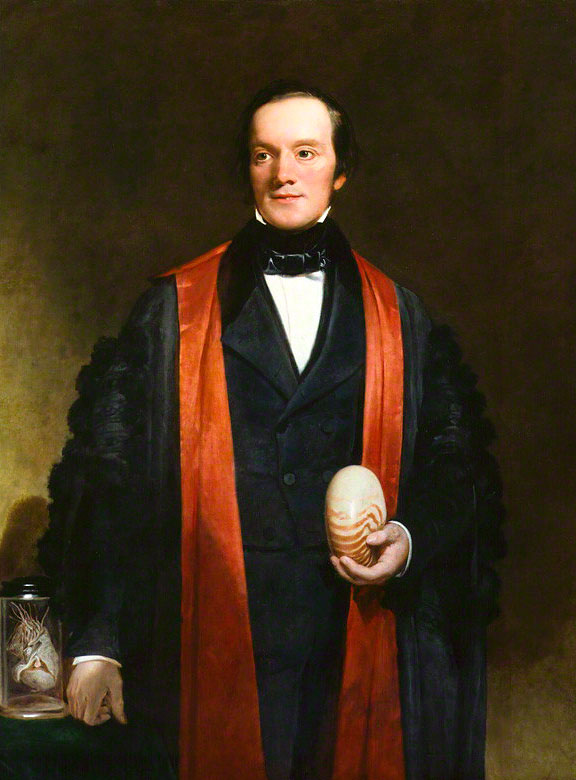 Richard Owen (1804-1892) was a British anatomist and pioneering paleontologist. In 1839, he confirmed the existence of an extinct species of giant flightless bird, the moa, by examining a single fossil bone from New Zealand. The achievement, which earned him the nickname "the British Cuvier," after Georges Cuvier’s deductive methods, gave credence to Edward Hitchcock’s hypothesis that giant birds had made the fossil footprints in the Connecticut River Valley.

Having examined the fossil bones of Iguanodon, Megalosaurus, and Hylaeosaurus, Owen concluded that they were not lizards, as originally classified, but represented "a distinct tribe or sub-order of Saurian Reptiles." He named this group Dinosauria, effectively coining the word “dinosaur,” in 1842.

Born in Lancaster, England, Owen studied medicine at various institutions before entering the Royal College of Surgeons in 1826. Soon after starting medical practice, he became assistant curator of the college’s Hunterian Collection of human and animal anatomical specimens. By 1830, he had reorganized and cataloged all 13,000 specimens in the collections. Owen became Hunterian Lecturer in comparative anatomy and in 1837, delivered his first lectures to an enthusiastic public. His audiences included royalty—he later taught natural history to Queen Victoria’s children—and Charles Darwin, newly returned from expeditions on the H.M.S. Beagle. At the time, Owen was also helping Darwin describe the fossil vertebrates Darwin had collected in South America.

In 1856, Owen took charge of the natural history collections at the British Museum. As his scientific reputation grew, he served in various official roles, including as an adviser and expert witness to the government. He did not wear his eminence lightly, often clashing with colleagues, some of whom found him arrogant, even envious. Darwin reminisced in his autobiography that Owen became his enemy after the publication of the Origin of Species, "not owing to any quarrel between us, but as far as I could judge out of jealousy at its success.” Owen’s public opposition to Darwin’s theory of evolution damaged his own reputation, not only for its vindictive overtones but because of anatomical mistakes he made in his opposing argument.