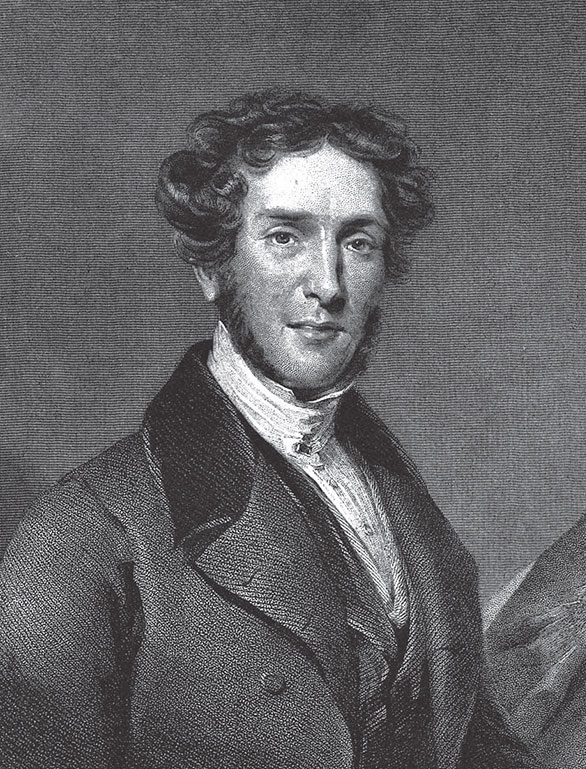 Gideon Mantell was an English obstetrician from Lewes, Sussex, a few miles north of Brighton, the son of a shoemaker. He was drawn to the exciting new science of paleontology, and had been collecting fossil bones and fragments from the South Downs for several years when, in 1822, he (or possibly his wife) came across an unusual fossilized tooth. Mantell sent the tooth to the great George Cuvier in Paris in the care of his good friend Charles Lyell. When Cuvier pronounced it a rhinoceros tooth, however, Mantell could not agree. Eventually, a curatorial assistant at the Hunterian Museum noticed that it looked like an extraordinarily large iguana tooth. Mantell sent more teeth to Cuvier, told him of the discovery, and asked him to reconsider. The Frenchman graciously acknowledged his error, and Mantell was vindicated. In 1825, he published his paper on the topic, “Notice on the Iguanodon, a Newly Discovered Fossil Reptile, from the Sandstone of Tilgate Forest, in Sussex.” The fossil tooth is widely recognized as one of the first dinosaur discoveries. Although the story of finding it has become legendary, Mantell’s accomplishments went far beyond that single incident. He is credited with the discovery of four of the five genera of dinosaurs known in his day.

Mantell moved to Brighton in 1823, where he opened a museum in his own home. Unfortunately, the expenses nearly drove him bankrupt, and he was forced to sell the collection to the British Museum and move to London in 1838. His wife left him the next year, accusing her husband of preferring fossils to her. A son whom he had hoped would carry on his geological interests instead emigrated to New Zealand. In 1840, a beloved daughter sickened and died. In 1841, Mantell himself was thrown from a carriage, causing serious injury to his spine.

Mantell corresponded with Benjamin Silliman for many years. While they never met fact-to-face, he found in Silliman a sympathetic listener, and their letters ranged well beyond intellectual scientific communication. While he continued to avidly pursue his interest in paleontology, Mantell never recovered from his spinal injury, and began taking opium to kill the pain in 1845. He died of an overdose in 1852.