The Geological Society of London 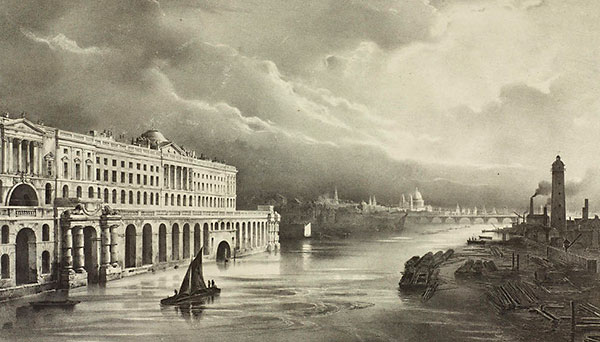 Somerset House, where the Geological Society of London and numerous other organizations held meetings, was once quite literally on the banks of the Thames River. Construction of The Embankment began in the 1860s, adding several acres of land to the area. Image courtesy of Collage The London Picture Gallery City of London.

Founded in 1807, the Geological Society of London is the oldest geological society in the world. Its early history and membership epitomized the central role amateur researchers and enthusiasts played in founding scientific disciplines and organizations today dominated by professional scholars and scientists. Its publications, esteemed membership, and resources immediately made it a model for similar societies, including the Association of American Geologists and Naturalists (which later transformed into the American Association for the Advancement of Science, still prominent and active today).

An eclectic mix of thirteen men, including clergymen, physicians, and wealthy elites established the Society “for the purpose of making geologists acquainted with each other, of stimulating their zeal, of inducing them to adopt one nomenclature, of facilitating the communications of new facts and of ascertaining what is known in their science and what remains to be discovered.” The Society quickly became synonymous with the most prominent early geologists in the field, including William Buckland, Gideon Mantell, Charles Lyell, Henry de la Beche, and James Parkinson. It did not welcome everyone active in the field, however. Mary Anning was excluded from membership by her gender, class, and lack of formal education, despite being highly knowledgeable about the numerous fossils she discovered in the cliffs of southern England during the first half of the 19th century. Women would be barred from membership until 1919.

The Society assembled a library and collection of minerals, rocks and fossils. Specimens were housed in a cabinet presented by Dr. William Babington, a physician who was among its founders. In 1825,  King George IV granted the Society a Royal Charter for “Investigating the Mineral Structure of the Earth”. In 1911, the mineral and fossil collections were transferred to the Geological Museum and British Museum (Natural History).

Committed from its founding to share and debate the latest geological theories and discoveries, the Society began publishing in 1811, a practice that continues to the present day. In the very first Proceedings in 1811, James Parkinson claimed fossil study as a branch of geology: “The study of fossil organised remains has hitherto been directed too exclusively to the consideration of the specimens themselves; and hence has been considered rather as an appendix to botany and zoology than as (what it really is) a very important branch of geological inquiry.” Parkinson asserted fossils could shed light on “the formation and structure of the earth” but cautioned “to gain information of consequence from them on these subjects, it is necessary that their examination should be connected with that of the several strata in which they are found.” His hope has been fulfilled, as fossil evidence is an important feature for finding the period in which sediments were laid down, and thus the dating and ordering of geological strata.