The Boston Society of Natural History 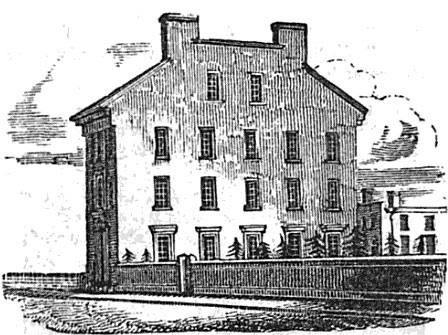 The Boston Society of Natural History met in this building before moving to Mason St. Image is from Sketches of Boston Past & Present, by Isaac Smith Homans, published by Phillips, Sampson & Co., 1851. Image courtesy of Archive.Org.

The Boston Society of Natural History (BSNH) was founded in 1830, and chartered by the state in 1831, as a research institution for men with a serious interest in studying nature. Most of the first members were physicians, but businessmen and members of other professions joined as well. The Society offered members a place to meet to exchange ideas with scientifically minded men. Its fortunes can be traced through its meeting places. After using a room at the Boston Athenaeum for the first two years, the Society moved into its own space above a bank overlooking the Boston Common. In 1847, it bought a building on Mason Street, where its members met for a decade and a half until finally erecting their own fine building on the corner of Berkeley and Boylston streets. This was near the first location of the fledgling Massachusetts Institute of Technology, which had not yet moved across the river to Cambridge.

While many of the members were knowledgeable amateurs, professional scientists (often from Harvard) also joined, for example, Louis Agassiz, Jeffries Wyman, Augustus Gould, Asa Gray, John Collins Warren, Henry Ingersoll Bowditch, Jacob Bigelow, and Henry Darwin Rogers. Not all members were local: Edward Hitchcock came from Amherst and James Deane was from Greenfield. The Society quickly took on a professional cast, publishing scientific papers, and from 1834-1863 producing the Boston Journal of Natural History. In 1838, they began to designate curators for major areas of their collections. They had an extensive library, gave lectures to public audiences, took an active interest in education, and exhibited members' impressive collections of shells, birds, fossils, and other such items.

John James Audubon's deservedly famous Birds of America was among the Society's treasures. Audubon became a member while wintering in Boston in 1832-1833. He became ill and was nursed back to health by three doctors, two of whom were BSNH members, John Collins Warren and George Shattuck, and they became good friends. Audubon was in the midst of publishing Birds of America at the time and was keeping an eye out for subscribers. Such elaborate books, with their exquisite illustrations and, in this case, in unusually large format, were expensive to produce. The costs were covered through advance subscriptions to pay for the paper, printing, and binding. Individual BSNH members contributed to a fund to purchase a subscription of Audubon's books for the Society. Later, when the value of the set of four volumes skyrocketed, they were kept in a special locked cabinet.

As early as 1836, the Society had its own elephant skeleton on display. Members donated or loaned their personal collections of rocks, shells, and other items from nature, not only for display but also for other members to study. After buying a significant portion of Dexter Marsh's collection of fossil footprints at his death in 1847, the BSNH continued to add to it by acquiring more footprints from Roswell Field, Edward Hitchcock, and James Deane. One of the most active members was a businessman, Thomas T. Bouve, who was Curator of Geology for many years and then served as president.

By the end of the century the BSNH had exhausted its mission. They stopped publishing the Journal after 1863. Professional men became less interested in working so closely with amateurs and began to spend more time in their own research institutions. In 1914, the BSNH dispersed any collections that were not specific to New England, and later, even those materials were shed. During the 1930s, the fossil footprints were signed over to Harvard's Museum of Comparative Anatomy. In 1946, the elegant building on Berkeley Street was sold and the BSNH became the Boston Museum of Science. The mission changed from research to public education, and the scope of sciences expanded to include a planetarium and exhibits about physics, chemistry, and other fields of science.