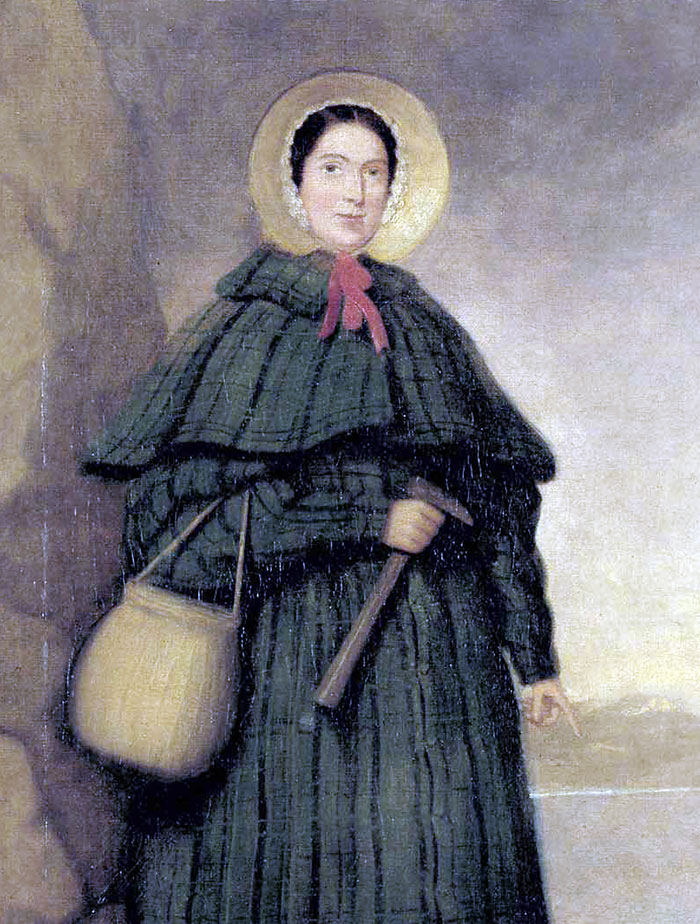 Mary Anning was born in Lyme Regis, on the south coast of England. By the age of 5 or 6, she was assisting her father in finding fossils along their town’s shoreline and became accomplished at excavating and polishing them. She sold the fossils she found to provide much needed funds for her family. By age 27, she had saved enough to buy a home, in which she established a fossil shop.

When she was 10, Mary’s older brother found a large skull on the beach, and a year later, Mary discovered the rest of the body. It was the first complete skeleton of what would become known as an ichthyosaur. At the time, long before the term “dinosaur” was coined, scientists were baffled by this reptile/fish-like creature.

Through the course of her life, Mary discovered 34 new fish species and fossilized dung (known as “coprolites”) from ichthyosaurs. Her noted finds included Plesiosaurus giganteus, pterosaur (Dimorphodon), Squaloraja polyspondyla, and Plesiosaurus macrocephalus. Although she had only 3 years of formal education, she became adept at illustrating her finds and she taught herself anatomy by dissecting sea creatures.

Leading scientists from the Geological Society of London, such as William Buckland, Henry de la Beche, Charles Lyell, Gideon Mantell, William Conybeare, and Roderick Murchison and his wife, Charlotte, came to know and respect her through personal visits and correspondence, but rarely did she receive credit for her finds. As a woman and a member of the working class, she was not able to pursue higher education, nor attend lectures—much less, be granted membership—at the Society. Her discoveries were discussed at the meetings, however, and she did have her champions among the educated upper class. De la Beche gave her the proceeds from the sales of a watercolor he made for her, and Buckland arranged a pension from the British Association for the Advancement of Science for her in her later years, when she suffered from the breast cancer that eventually killed her in 1847, at age 47.