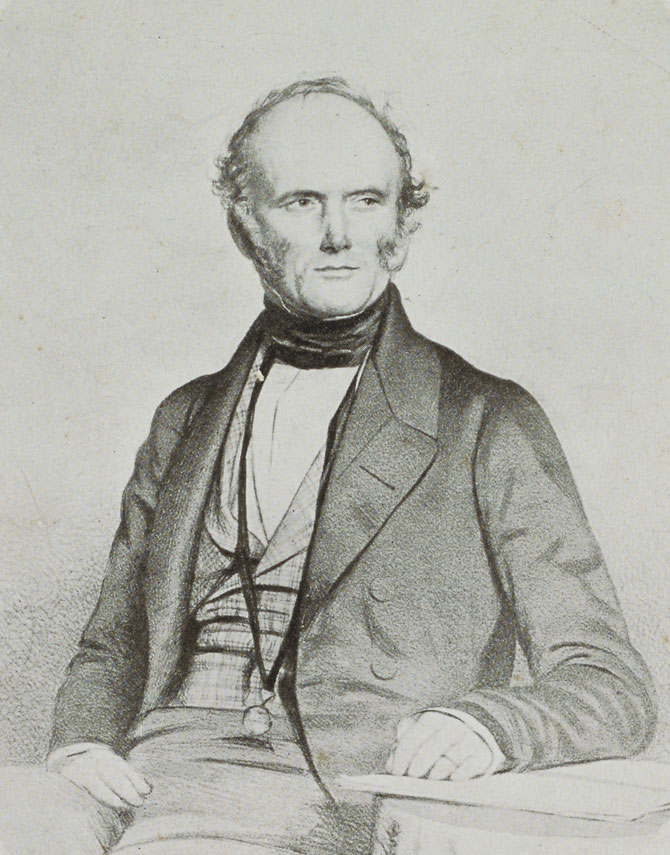 Charles Lyell was born in Kinnordy, Scotland, in 1797. He graduated from Exeter College, Oxford, in 1821, practiced law for only a couple of years before turning his full attention to geology. In 1823 he became joint secretary of the Geological Society, and in the 1830s he was a professor of geology at King’s College in London.

The three volumes of Lyell’s Principles of Geology were published from 1830-1833. This was his first and best known book, considered by many to be among the most influential scientific book ever written. While uniformitarian ideas were not original with Lyell, he meticulously built his case that the earth was not shaped by sudden cataclysmic events such as floods, volcanoes, and earthquakes, but rather by tiny, slow changes over an immense period of time. Following the Scottish geologist James Hutton, he stated that the same forces that affect the earth today have done so through time, and when studying geology, “the present is the key to the past”. Charles Darwin read Principles of Geology while on board The Beagle, and upon arrival back in England after five years away, made it a point to meet Lyell, starting a lifelong friendship. Lyell's work provided the geological underpinnings for the long periods of time needed for Darwin's ideas about evolution to work, although Lyell himself was exceedingly slow to adopt Darwin's theory.

In addition to authoring Principles of Geology, Lyell is also known for his explanation of earthquakes; the Pliocene, Miocene and Eocene divisions of the Tertiary period; and he named the Paleozoic, Mesozoic and Cenozoic eras.

Lyell became Sir Charles Lyell in 1848, received the Copley Medal of the Royal Society in 1858, was made a baronet in 1864, and received the Wollaston Medal of the Geological Society in 1866. He died in 1875 and is buried in Westminster Abbey. A number of places on earth and in space bear his name, including Yosemite National Park’s highest mountain, craters on the moon and Mars, and mountains in Australia and New Zealand.