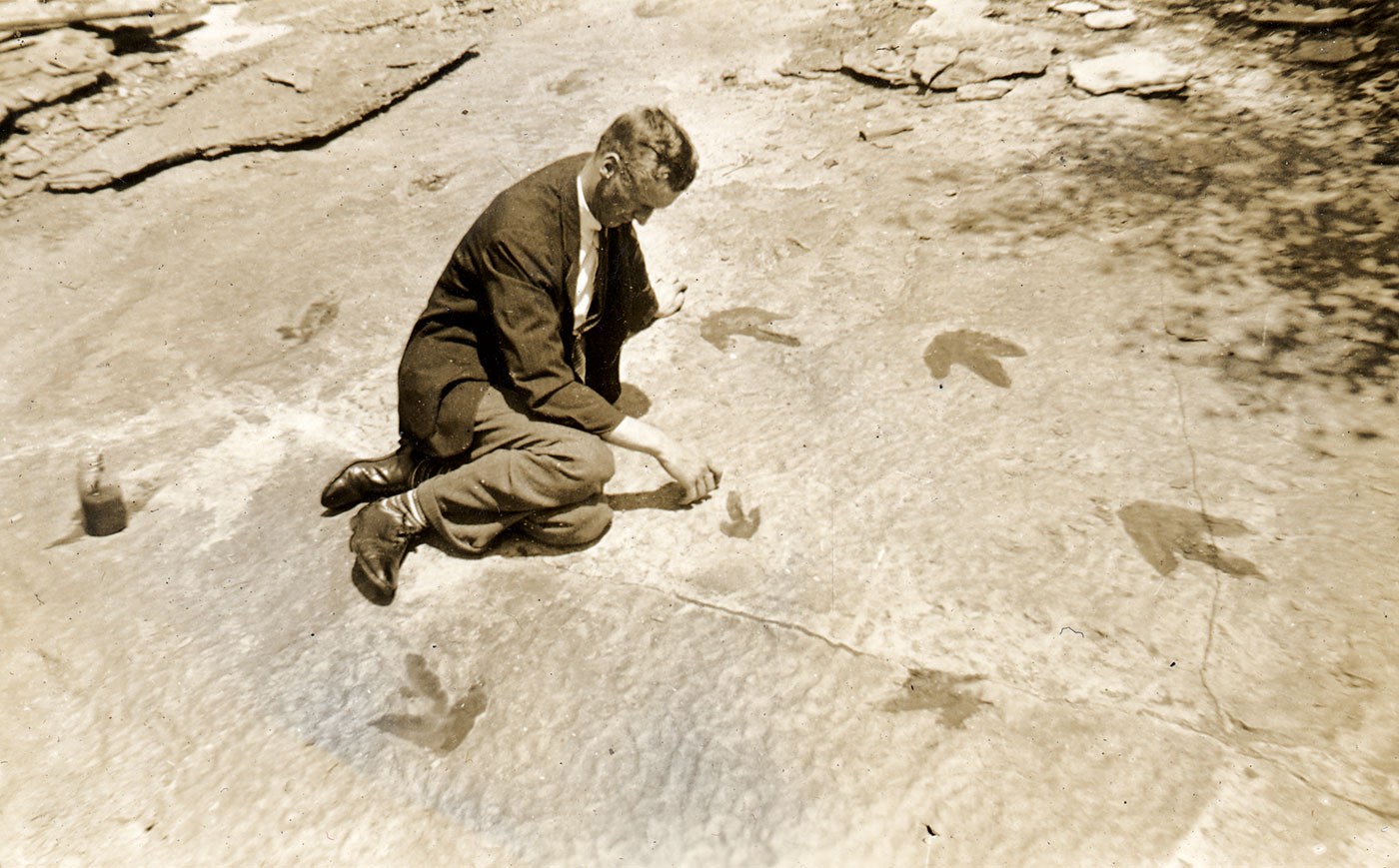 It may seem obvious to us today that the marks in the sandstones found in the Connecticut River Valley were made by dinosaurs. And we might think it should have been obvious to James Deane, Edward Hitchcock and the other protagonists in the story, too, even venturing to say that it was an obvious mistake to think that the footprints were made by something other than a dinosaur. However, obviousness as to what evidence means is in the eye of the beholder.

All evidence requires a background set of assumptions for forming a hypothesis or a particular interpretation. This is especially true of what is called "theoretically-laden evidence", that is, a meaning not tied directly to everyday, observable experience and thus requiring a theory to make it intelligible. (For example, there are no volcanoes in the Connecticut River area today, but there are basalt ridges, and since basalt is the result of cooled lava, we know that there once was volcanic activity here even though we cannot see it today.) A related issue is the importance of the evidence. To claim that for a particular interpretation it is important or significant, we again need to employ background assumptions. Once we understand these points, we can begin to uncover the background beliefs or assumptions that were in play in the discovery of the “fossil bird tracks,” now known as dinosaur footprints.

Many pieces of evidence are quite closely connected to everyday experience and do not require specifying the context much if we wish to communicate their meaning. For instance, if I want to claim that the sun is shining, all I have to do to do is to point to the yellow thing in the sky or at sharp shadows on the ground. Such pieces of evidence carry their meaning and relevance “on their sleeves,” so to speak. Their meaning is obvious. In contrast, most pieces of scientific evidence, while certainly tied to observations, require us to make explicit a set of background beliefs or assumptions if we are to understand their meaning. Much, if not most, scientific evidence keeps its meaning and relevance “up its sleeve,” or not obvious.

A good example is a particle track in a cloud chamber. To “see” the track of condensed vapor as evidence that a subatomic particle has traveled through the chamber, one has to employ a large number of assumptions about how such chambers work, how vapors respond to the passage of material objects, the structure of matter and the way it behaves, to name just a few. A medical context also supplies a ready stream of examples. For example, suppose a child has red spots on his stomach. That is the evidence, but what do we assume?  We might claim that the child has measles, or it could be evidence that the child has some sort of gastric ailment. The spots could be eczema, in which case they are evidence for some sort of skin condition that may or may not be related to the immune system. Finally, although we would probably not think so, someone with a very different set of assumptions might claim the spots are evidence for a state of good health. The message is that the same state of affairs, the same evidence, can lead to different and even conflicting hypotheses. Why we take some states of affairs as evidence for a particular hypothesis depends on other beliefs.

How does this framework apply to the history of interpretations of the tracks? Let’s take a walk through some illustrative moments to illuminate the background beliefs that were at work and that were reasonable and rational at the time. However, even though they were reasonable at the time, we can now say that the background assumptions they utilized are not based on good evidence or good theory.

When, in 1835, James Deane presented his hypothesis to Edward Hitchcock that the marks were made by birds, Hitchcock at first thought, without even actually seeing the specimens, that the marks had been made by a geological process such as erosion. As such, the impressions were then not for a creature that had once been alive. Why did Hitchcock think this? In science, it is common to employ a background assumption that what you observe is similar to what you have seen before. Hitchcock had seen similar marks in red sandstone and had interpreted those as natural results of weathering. Since he replied to Deane that he thought it unlikely that birds had made the tracks, another assumption at play was the belief that birds had not existed at the time the rocks were formed, since birds of any sort, much less those with feet that large, had not yet been found that far down in the geological record.

After seeing the slabs with his own eyes, Hitchcock  then saw the impressions as evidence for birds. Others were not so convinced, in part because there were no bones to accompany the prints and in part because the footprints were so large compared to known birds. Again, we have background assumptions being utilized to turn the tracks into evidence for a particular interpretation. One assumption is that bones would confirm the evidence of the imprints. The other is that, without good reason, we shouldn’t accept a hypothesis that postulates an entity quite different than anything we know. Both of these make the process of science somewhat conservative and perhaps even biased toward the familiar. But without compelling evidence or theory to make us go beyond the familiar, it is reasonable to stick with what we know. If I hypothesize that little green men are on my lawn, you are quite justified in remaining with your familiar interpretation until I come up with evidence or a theory that makes my hypothesis plausible.

New evidence can change the plausibility or reasonableness of background assumptions. A good example is the identification of the bones of the moa in 1839, by Richard Owen. It was known that moas had existed when Polynesians arrived in New Zealand around the 13th century, but were extinct long before the arrival of European explorers. Given the size of the skeletal bits and pieces that were found, it was apparent that the birds stood over nine feet tall. A new background assumption became available, namely, if recent birds could grow to such sizes, then prehistoric ones could have been just as large, or even larger.

As noted above, background assumptions can function conservatively. Hitchcock continued to believe that moa-like birds made the tracks. After the discovery of Archaeopteryx in the early 1860s, he argued that like these birds, those who left the tracks might have had a long, reptile-like tail. To Hitchcock, this made the discovery of what he saw as tail drag indentations in the fossils consistent with his hypothesis of archaic birds. Another assumption, somewhat further in the background, was his belief that the Bible and science could be reconciled. Near the end of Hitchcock’s life, Charles Darwin’s new theory of evolution was announced.  Hitchcock disliked the theory and espoused instead what would now most probably be regarded as a kind of intelligent design theory. Given that belief, he was not interested in advocating for a process of evolutionary descent. Others—such as Darwin’s defender, Thomas Henry Huxley—were not convinced by Hitchcock’s line of thinking and worked to replace this background assumption with another, that the fossils were evidence for dinosaurs that were the forerunners of modern birds.

Thinking about the relevance of background assumptions is linked to the issue of evidential importance mentioned above. Like Deane, Dexter Marsh, and Hitchcock, we see the tracks as significant, calling out for interpretation. During the first half of the 20th century, the fossil footmarks were no longer seen as significant. Spectacular fossil skeletons, discovered in the western states by heroic paleontologists, were at the focus of attention. No one disputed the interpretation of the marks as evidence for dinosaurs, but few thought they were of much, if any, importance because they did not think that footprints held much information the way skeletons do. An analogy might be if someone runs up to you as you sit on a broad expanse of lawn and exclaims, “Look at this blade of grass!” Unless you have some reason to think that particular blade is important, you are likely to respond with “That’s nice.” Of course, the blade might become important in different contexts, such as finding an invasive species. Likewise with the dinosaur footprints. When the marks were taken as evidence for dinosaurs traveling in packs, they became significant again.

In sum, there are many interpretations of the evidence of the tracks. We haven’t seen the animal in question tromping through the mud, so we have to infer its existence and its properties. The tracks are "theory-laden" in this sense. And thus, to think that they are evidence for a particular non-existent object requires a set of background assumptions.