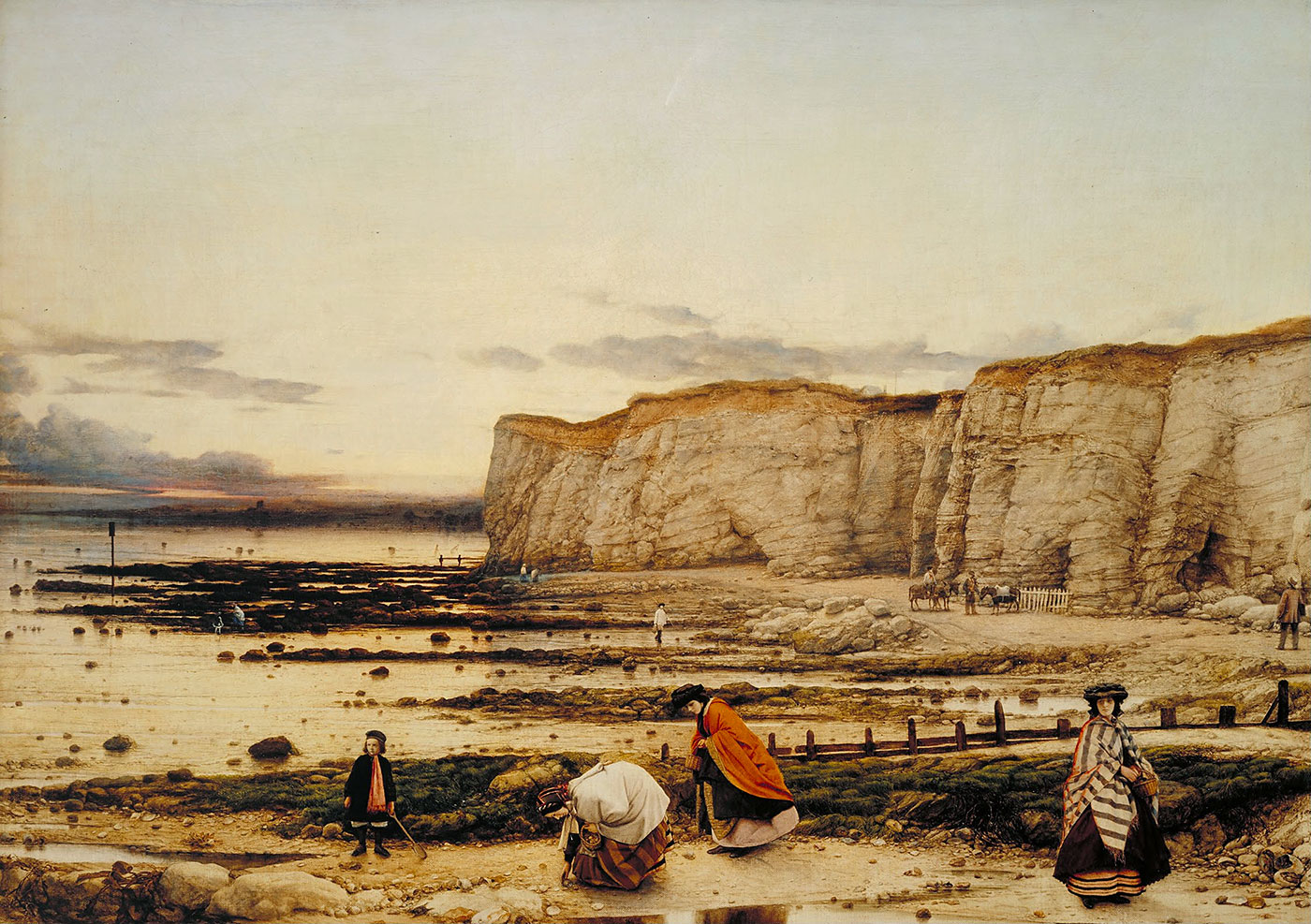 While many factors affected early 19th century women’s ability to function in the arts and sciences, perhaps most profound was the idea of “separate spheres.” Promulgated in late 18th century France, this notion held that the proper place for men was the public sphere of government, commerce, and the learned professions. The private sphere of the home, husband, and children was the proper place for women.

Marshaling arguments from biology and religion, proponents claimed that to be truly happy, women should be sheltered from the turmoil and crassness of the public sphere, lest their ability to bear children be impaired. Jean-Jacques Rousseau in particular argued that the prime means for female happiness was the bearing and rearing of children. This gave rise to the ideal of the Good Mother, also called True Womanhood. This notion spread through the Western European world, including North America, and is readily seen in the literature, arts, and society of the ensuing century. It seriously impaired a woman’s ability to move freely outside of the home, limiting her social and educational opportunities.

However, it must be noted that this standard actually applied mainly to the upper classes, wealthy enough to maintain female family members apart from production. For the working classes and the poor, every hand, male, female, and child, was necessary to produce or earn sustenance for survival. Indeed, the lot of women from these classes was held up as a model of what was most desirable for the well-bred lady to avoid. Thus upper-class women were to be removed from productive activities outside of the home, and turned to consumption instead. The situation of a family’s wife and daughters became one of the several means used to denote class status.

Families bent on demonstrating their upper-class status, as well as those aspiring toward upward mobility, sought out a “proper” education for their daughters. From Colonial times, basic education of reading, writing, and simple mathematics was to be provided through “dame schools,” boarding schools, rural subscription schools, or, eventually, the "common schools" within each state. For most children, this grammar school level was the limit of any formal education they might receive.

However, for sons and daughters of wealthy and aspiring families, further formal education was essential. For girls, this took place in the female academy. There the goal was to prepare them to attract a husband and gain the skills needed to manage a household and raise children. Such education was divided into the “Useful” and the “Ornamental Accomplishments.” While oratory, literature, history, and some sciences such as astronomy and botany might be included, needlework was at the heart of female academy education. Deemed a useful as well as an ornamental branch for women, it took the form of samplers during grammar school, leading to complex needle pictures by the young academy women. The products of this work were displayed as evidence of a young lady’s refinement and suitability for marriage.

Realistic drawing was also taught, primarily by copying prints, rendering flowers from life, and “taking views” (landscape drawing). These activities introduced young ladies to scientific illustration, with close observation and careful rendering. To some degree, taking views led them to the study of geological landforms. However, the smattering of skills gained was limited to the level of an accomplishment; to aspire to mastery was unseemly for a refined lady. Moreover, the work a woman produced should never be done for pay; that was demeaning, and marked a lack of refinement. Indeed, the real purpose of a woman’s education was to prepare her to be the first teacher of her sons.

Informal education provided within the home played an important role in a young lady’s preparation for adulthood. The skills and knowledge residing in both parents provided opportunities and direction for a child’s earliest learning that often included some aspect of what we would now call the sciences. For children of both genders, such informal education was important; however, for girls, it was essential.

Given the constraints imposed by the practices of "separate spheres", and the resultant limitations on access to education, it might not be surprising that so few women participated in the sciences. However, the real story is that, given the obstacles to their participation, so many women overcame them and found ways to contribute their skills and talents. As long as informal education was available, and the sciences remained an essentially amateur avocation, women could find a way in.

Family played the key role in determining a woman’s future in science, and it did this in several ways: a father’s provision of early access to education; inherited wealth; and a husband’s interest and work in the sciences.

It was generally up to the father to decide whether or not to educate his daughters, and many girls, especially of the upper classes, benefited. For Orra White (1796-1863), this included private tutoring in the home and formal education in two of the best boarding schools for females in South Hadley, Massachusetts, and Boston. From the beginning, she pursued drawing, filling several sketchbooks, and studied Latin, Greek, and the natural sciences in addition to needlework. Another accomplished woman, Elizabeth Cary (1822-1907), who became the wife of the Harvard professor Louis Agassiz, was plagued with ill health and received no formal schooling as a girl, but studied languages, reading, drawing and music at home.

Some fathers actively encouraged their daughters in the study of geology. This was the case for Mary Horner (1808-1873), whose father was a professor of geology in England and Germany. Mary Morland (1797–1857) lost her mother at an early age and was influenced by her father’s interest in geology. She spent much of her childhood in the home of Oxford professor of anatomy, geology and mineralogy, Sir Christopher Pegge, who encouraged her geological interests, and also willed to her his mineral and fossil collection. Both women married geologists who contributed significantly to the field, becoming Mary Lyell and Mary Buckland, respectively.

If family wealth limited a woman’s access to the public sphere, it also opened other opportunities. Such wealth allowed Marchioness Barbara Rawdon Hastings (1810-1858) to amass the “Hastings Collection” of several thousand English and European fossil specimens, now held at the British Museum. Charlotte Hugonin Murchison (1788-1869) collected her own fossils in fieldwork that spanned her whole lifetime. In a reversal of circumstances, it was Charlotte who actually encouraged her husband, Roderick, to take up the study of geology. Moreover, her inherited wealth allowed the couple to purchase a fine house and throw parties for dignitaries, politicians, and leading scientists, and generally promote Roderick’s career.

Marriage was a two-sided blade for women in the sciences. On the one hand, a scientist-husband opened up opportunities for his wife. On the other hand, childcare and domestic duties limited women’s time for scholarly pursuits. Indeed, in some cases husbands, embracing the tenets of the “separate spheres,” forbade their wives further public engagement.

Prepared with the education in realistic drawing featured in “female accomplishments,” academy-educated women were ideally prepared to provide illustrations for their scientist-husbands’ publications. Such drawing could be done conveniently in the home, did not conflict with domestic duties, and required no salary.

In fieldwork with her husband, Charlotte Hugonin Murchison collected fossils, made sketches and notes, and processed and recorded specimens. Her field sketches later illustrated Roderick’s publications. It is notable that both the Murchisons and the Bucklands celebrated their weddings with extended geological excursions as the honeymoon. It is also notable that many of these women, especially in Europe, assisted and traveled as part of their husbands’ serious fieldwork.

Mary Horner Lyell and her husband, Charles, were scientific partners. She accompanied him on field trips and assisted him by sketching geological drawings, packing equipment and specimens, and cataloging their collections. She learned Spanish and Swedish as well as her academy French and German to aid communications on these travels.

In Boston, Elizabeth Cary Agassiz followed a similar path. Married to widower Louis Agassiz, she organized, managed, and accompanied him on expeditions to Brazil and the Straits of Magellan. For the latter trip, she was the main writer and record-keeper. She took notes on his natural history lectures that became the basis for many of her husband's publications.

In Mary Anning (1799-1847) of Lyme Regis, we see an example of the rare working-class woman who worked in paleontology with no husband to legitimize her. However, digging fossils started as a family affair for her, as she joined her father and brother in the business of selling shells and fossils, which she carried on when her father died and her brother went on to other endeavors. A woman who struggled financially all her life, she collected and sold fossils from the local seaside cliffs, which she scoured after winter storms and landslides. She is famous for discovering the first correctly identified ichthyosaur skeleton, the first pterosaur skeleton found outside of Germany, the first two more complete plesiosaur skeletons found to that time, and numerous important fish fossils. Her work led to the identification of Bezoar Stones as fossilized feces, or coprolites. She discovered the relationship between belemnites and modern cephalopods, such as octopus and squids. Although well-known in geological circles in Britain, Europe, and America, she was ineligible, as a woman, to join the Geological Society of London, and often did not receive complete credit for her work.

Despite Charlotte Hugonin Murchison’s essential work on an expedition with Charles Lyell, she was banned, as a woman, from the public lectures he gave about the fieldwork at Kings College in London. In an effort to change this, she appeared at the lecture with the Scottish science writer Mary Somerville, and he relented, opening the lectures to the other women also waiting for admittance.

Elizabeth Cary Agassiz made great advances in opening educational doors for women, starting with the school for girls that she taught in her home. Instruction included courses taught by her husband, Louis, and other professors from Harvard. She helped to found the coeducational Anderson School of Natural History on Penikese Island in Buzzard’s Bay, Massachusetts. Six years after being widowed in 1873, she worked to open the “Harvard Annex,” and became its president when it was re-incorporated as the “Society of the Collegiate Instruction of Women". The college was formally linked to Harvard in 1894, as Radcliffe College with Agassiz still president.

In 1869, Elizabeth Cary Agassiz was among the first women, along with Maria Mitchell, admitted to the American Philosophical Society. In England, Mary Anning had to wait another 163 years after her death to be honored in 2010, by the Royal Society in a list of the ten British women who have most influenced the history of science.