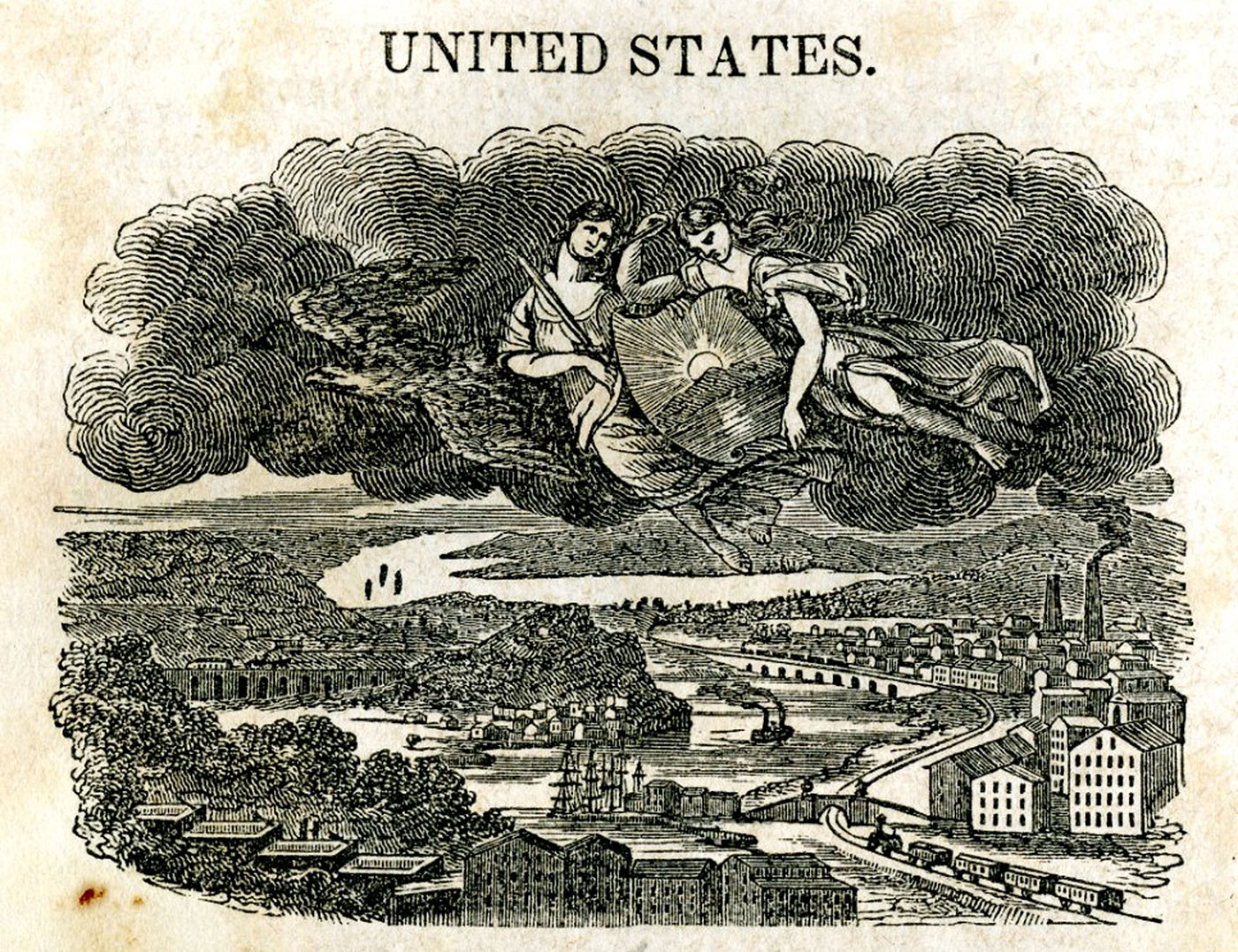 The United States was a rich nation; its people showed little hesitation about exploiting what nature provided. Necessity drove the early settlers to clear land and to hunt wildlife and ambitions for wealth drove the great mineral booms, but justification for all could readily be found in Scripture, where mankind was promised dominion over the earth and its products--a natural patrimony at first, but one that had to be earned by the sweat of the brow after Adam's sin. In the 17th century, Francis Bacon, the influential English propagandist for science, had amplified this theme. “In the Fall,” he wrote in the final aphorism of the New Organon, “man underwent a loss of innocence and a weakening of his power over creation. Both of these losses can be to some extent made good, even in this life—the former by religion and faith, the latter by arts and sciences.”

Bacon’s identification of science with the command of nature spoke vividly to many Americans as they labored to remake North America in the image of their European homelands, if not the Garden of Eden itself. Edward Hitchcock shared the English philosopher’s conviction that nature was made for mankind’s instruction and benefit. So, too, did Benjamin Silliman and most American naturalists of their era. And much like Bacon, they took satisfaction when they saw land and water made productive for human ends. Development was God’s intention--part of his plan for humanity and the world—and hence plow, mill, and quarry deserved a welcome place in the landscape.

Even in colonial days, America’s potential had seemed boundless.

"Thus there are suppos'd to be now upwards of One Million English Souls in North-America, …. This Million doubling, suppose but once in 25 Years, will, in another Century, be more than the People of England, and the greatest Number of Englishmen will be on this Side the Water. What an Accession of Power to the British Empire by Sea as well as Land!" [Benjamin Franklin, Observations Concerning the Increase of Mankind, Peopling of Countries, Etc. (1751)]

Franklin may have misread the politics but was very nearly right about the demography. The English colonies would prosper and grow, although not under the Union Jack. By 1793, the year of Edward Hitchcock’s birth, Franklin's million had become over four million, and by 1840 this number more than quadrupled once again, to become seventeen million, greater than the population of England and Wales. For Thomas Malthus, the English political economist whose Essay on Population would later lead both Charles Darwin and Alfred Russell Wallace to the idea of natural selection, the growth of the young United States was a prime example of how population could expand in the absence of significant checks.

Population growth, of course, demanded resources: little more than foodstuffs and timber at first, but by Hitchcock's era, a growing list of materials necessary for an expanding and diversifying economy, including iron for tools and rails, lead for pipes and paints, and of course, the coal that was becoming increasingly vital to fuel steam boilers and blast furnaces. In the final decades of Hitchcock's life, stunning mineral discoveries lured thousands westward and reshaped significant parts of the United States. Michigan's remote Upper Peninsula boomed in the 1840s as Boston investors and Cornish miners exploited some of the richest copper ores in the world. There followed the famous gold rushes to California (1848) and Colorado (1858), the Comstock Lode silver strike in Nevada (1859), and the frenzy over oil that began in western Pennsylvania in 1859 and later shifted to locales stretching from Ohio to Texas.

Geology’s role in America’s expansion, modest at first, became increasingly important as the 19th century wore on. Between 1823 and 1861, twenty-eight of the thirty-four states of the Union launched geological surveys. They all were driven by hopes of promoting economic development, although the specific purposes varied from case to case. For some, the primary goal was to identify fertile farmlands and soil amendments, such as lime and peat. Others wanted information useful to the selection of canal and rail routes: topographical maps, inventories of timber for rail beds, locomotive fuel, and telegraph poles. Still others were organized in response to serendipitous discoveries of gold, lead, and other minerals. Just about all were eager to assess coal resources since it was widely understood to be the prime mover of modern industry.

In the long-settled states of New England, the surveys were concerned less with exploration and discovery, as was the case in newly organized states and territories, than with the rational exploitation of the resources that had already been detected or which, at least, were suspected to exist. Edward Hitchcock’s survey of Massachusetts set the standard here. Drawing on his own observations as well as those of the many businessmen and farmers he met while tramping across the Commonwealth, Hitchcock patiently described the extent and quality of beds of granite, marble, and other building stones, the location of sands sufficiently pure to use in glass-making, the sites of bog iron, many of which were already being worked to supply small blast furnaces, and of course, the extent of the anthracite coal beds that were exciting some hopes among would-be industrialists.  Where he already found quarries and mines, he could often provide advice on the extent of untapped resources. “Cape Ann,” he wrote, is little less than a vast block of [granite]; it must be regarded as a substantial treasure to that part of the State,--far more valuable than a mine of precious metals.”  [Report (Amherst, 1833), p. 15] Perhaps his most important contribution, however, was to throw cold water on extravagant hopes for hidden mineral wealth. The coal bed near Worcester, he observed, was thin and yielded anthracite distinctly less useful than the anthracites of Pennsylvania or even Rhode Island. A little gold had been found in streams along the Vermont border; this, Hitchcock explained, was probably washed down from small gold veins in the Green Mountains of Vermont and certainly did not indicate rich deposits.

The goals of promoting economic development and advancing geological science sometimes clashed, and a few state surveys foundered when state geologists disregarded their legislature’s priorities. But far more often the two pursuits advanced side-by-side.  The geologist’s growing understanding of the stratigraphical column, for instance, gradually yielded insights into the relationships between specific types of rock formations and the presence of valuable resources.  At the same time, the systematic survey of regions large and small afforded abundant opportunities to study the materials and fossil deposits characteristic of particular strata and to situate those local beds in relation to others that colleagues were describing in their states and indeed across the globe. Or, to choose another example, the study of land forms and superficial materials could reveal the nature and extent of a resource as mundane as gravel while at the same time shedding light on the grand geological question of how water and ice shape the contours of the land—a subject that much interested Hitchcock. Indeed, for Hitchcock, the survey exemplified how the naturalist could serve both science and the public, and hence, illustrated the essential unity of knowledge.

Today we see the exploitation of nature as, at best, a mixed blessing. While generating wealth, it also inflicts damage: scars on the face of nature, disruptions to ecological balance, the pollution of air and water, and other long-term costs to communities.  Hitchcock and his fellow naturalists were not blind to these costs of development. "[I]f you blot out certain species of animals or plants,” he warned, “you disturb the balance of the whole system of organic nature," and this could lead to "the excessive multiplication of species still more injurious than those you have destroyed." [Religion of Geology (Boston, 1854), p. 232]. The solution, in his view, was not preservation of the sort that a later generation would champion but rather the finding of a happy mean, a middle landscape, where dominion over nature was informed by science and tempered by wisdom.